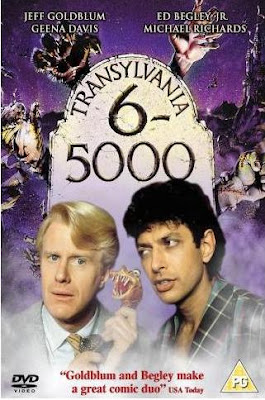 Tabloid reporters Jack Harrison (Jeff Goldblum) and Gil Turner (Ed Begley, Jr.) are sent to Transylvania with two choices: find the Frankenstein monster or find new jobs. But before the jumpy journalists can dig up their big story, they must first face the horrors of an extremely clumsy butler (Michael Richards), a nymphomaniac vampire (Geena Davis) and a semi-mad doctor (Joseph Bologna), as well as assorted mummies, werewolves and more Transylvanian oddballs. Can these two bumbling heroes unravel this monstrous mystery or are they in for some very scary surprises?

In 1985 Dow Chemical company had funds in Yugoslavia, but Yugoslav law prevented them from taking those funds out of the country, bit of a problem, the solution? Finance a movie!

This is the result.

It's great, one of my favourite films of all time, not much plot really but I like that in a film sometimes.

Basically Begley and Goldblum play reporters on an American red top paper who think that Frankenstein's monster is alive in Transylvania, their editor sends them to investigate and what follows is a lovely little slapstick type of film with several funny characters performing set pieces with a paper thin linking story, but that doesn't matter this film is great, hunt it down you won't regret it

Oh and Geena Davis in the best vampire outfit ever!!!