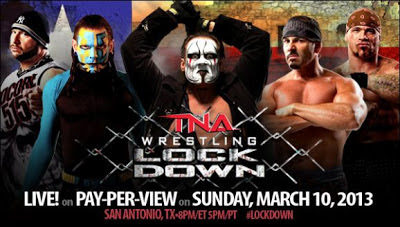 TNA Lockdown has always been a Pay Per View where every single match has been contested in a steel cage.  This year however things are a little different.  The first half of the PPV was under normal match rules then the second half were cage matches.  I thought that  was a much better way of doing because in previous years you were kind of feeling a bit burnt out by the constant cage matches.  Anyway, on to the matches themselves. 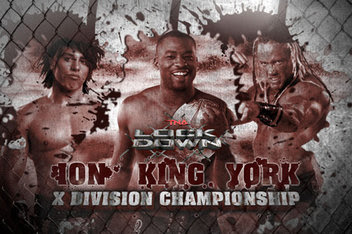 We opened things up with a three way match for the X-Division Championship.  The new champ Kenny King defended his newly won title against a former X-Division champion in the shape of Zema Ion and Christian York.

This was a fast paced match but for some reason it just seemed a little off.  When the match was between Ion and King, the match was smooth and exciting yet for some reason when ever York was involved it just didn't seem to flow.  All in all this was a good but not great match let down by a couple of botches, one of which involved King flying through the air but smashing the back of his head on the steel guardrail.  Luckily he wasn't injured and managed to finish the match.

This was followed by a short promo with Joseph Park, who was then tricked by the tag team of Bad Influence (Christopher Daniels and Kazarian) in to leaving during the interview.  Bad Influence then took over and delivered the awesome with another one of their promo interviews to hype the three team tag title match. 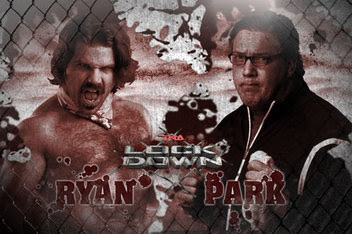 Mr Sleazy himself Joey Ryan was then put up against Joseph Park in what can be described as a filler match but with some very funny moments.  Ryan decided to completely cover himself with baby oil so that Park couldn't keep hold of him in one of the funny moments and that was followed by Park trying to pull the chest hair off of Ryan.

It's kind of a shame that Joey Ryan was stuck in a match like this and doesn't really seem to be going anywhere in TNA as he is a really good wrestler but that's life.


Joseph Park pinned Joey Ryan after sitting on him.

This was followed with a backstage segment with Bully Ray talking about his upcoming heavyweight title match with his 'wife' Brooke Hogan before Hulk Hogan came in and gave Bully a pep talk. 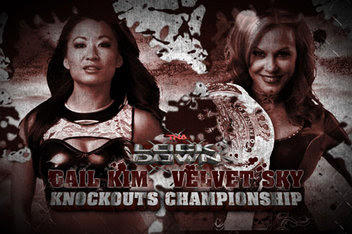 Velvet Sky then went on to defend her Knockouts Championship against the formidable Gail Kim in a match that seemed to be more about Kim's ongoing problems with the Knockouts referee Taryn Terrell than the match itself.

Matchwise it wasn't terrible and seemed to be a hell of a lot better than a lot of the women's matches recently in both TNA and WWE but I found myself getting too distracted by Kim and Terrell instead of paying attention to the title match.  I've always hated it when matches end up like that, especially title matches.  Call me old fashioned but title matches are meant to always have a 'big match' feel to them not be used as a means to further a non-related storyline.

I have to admit that Sky does seem a hell of a lot smoother in the ring than she used to be.

Next up was a short promo by Robbie E along with a video package about Robbie E and Robbie T being a team and then the inevitable break up.  Personally, I had no interest in this match in the slightest but the package itself was up the normal high standard set by other packages made by TNA. 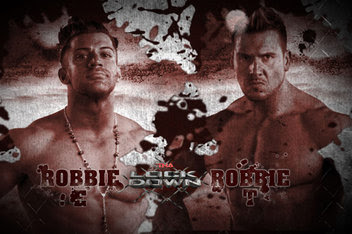 If I'm completely honest, this match would have been classed as filler on a normal episode of TNA: Impact yet alone on a PPV.  There are many different matches they could have put on in place of  this.

The match itself wasn't the worst match in the world but to be honest, I found it completely boring.  While Robbie E made Robbie T look like a monster by flying all over the ring whenever Robbie T was on the attack but it just didn't hold my interest despite it's short length.

Next up Austin Aries was talking to Jeremy Borash about the fact that nobody had heard from Robbert Roode for a while.  This was due to the real life contract negotiations between Roode and TNA.

When Roode turned up and said "Miss Me?", I had to laugh as I'd even fallen for thinking that he wasn't going to be there for the match due to the negotiations. 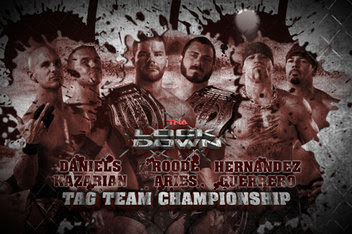 Next the Tag Team Championship was on the line as the championship team of Austin Aries and Robert Roode went up against the former championship teams of Chavo Guerrero and Hernandez and Bad Influence (Daniels and Kazarian).

When the hometown team of Guerrero and Hernandez came out I was fully expecting the crowd to be incredibly loud for them but they seemed happier to see Aries and Roode.

The match itself was fast paced and a hell of a lot better than the matches that preceded it.  I was rooting for Bad Influence during the match because they played  the cocky arseholes role very well and were really entertaining.

There wasn't really that much of an interaction between Aries and Roode and Bad Influence but hopefully that will mean that will be the next feud for the tag titles.  If I'm honest, I'm bored by the team of Guerrero and Hernandez, Hernandez in particular, as I just think he's a stereotypical big guy power wrestler.  Ok, he does a couple high flying moves but he just has never impressed me.  Guerrero just seems to be going through the motions in much the same way Rob Van Dam has been since coming to TNA, which is a real shame as Guerrero is a much better wrestler than he has shown thus far.

Aries and Roode retain the titles after Aries pinned Daniels due to Guerrero hitting the Frog Splash on Daniels before getting thrown out of the ring.

Taryn Terrell then spoke with Jeremy Borash about what happened in the Knockouts match before Gail Kim attacked her in revenge.  I'm kind of getting the feeling this may lead to a wrestling match between the two of them but I hope not as I've always found Terrell's work sloppy as hell.  That said, if anyone can get a good match out of her it will be Kim.

D'Lo Brown then gave a pep talk to the Aces and Eights members before Kurt Angle came out for an interview to hype up the match against Wes Brisco, hinting that he hadn't forgotten about Brown's betrayal.  It's another case of hoping this doesn't lead to a match between them as I've never been that impressed with D'Lo Brown as a wrestler and plus, he has been retired for a while now.

Next up is the first steel cage match of the evening! 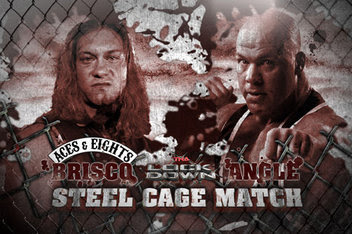 The best way to describe it is that it was like revving a car engine but not going anywhere.  The pieces were there for a good match but it just didn't come together.

After hearing all the good things about Brisco I have to admit, I really wasn't impressed in him in the slightest.  He seemed quite awkward during the match and also did something that really bugged me.  While apparently recovering from the various beatings from Angle, he kept stopping to fix his hair.  That made Angle's offence look weak as it looked like it wasn't affecting him at all, especially if he had time to mess about making sure his hair was OK.

This was easily  the worst Angle match I have seen in a long time.  Neither of them seemed all that motivated and could best be described as merely going through the motions until the cliched ending.

Wes Brisco escaped the cage after D'Lo Brown attacked Kurt Angle and threw him back in while the referee was down.

The video package hyping the appearance of Ace's and Eights and the feud with Team TNA.  It really made the feud look absolutely epic and even gave it a big match feel. 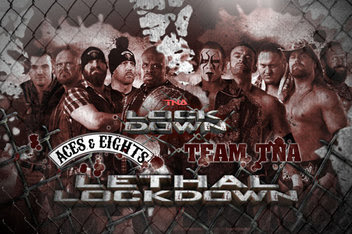 One of the things I didn't like was the fact that they dropped the whole roof coming down on the cage that has always been a tradition of the PPV.  I used to love watching the roof come down with all the weapons hanging down.  Oh well, things change.  Instead they went with Sting coming down to the ring with a garbage can full of weapons like New Jack used to do in ECW, which was a bit anticlimactic to say the least.

The match itself was really exciting and I was more than happy to see that they chose Magnus to go in first for Team TNA as I really think he has all the skills and protential there to become a main event player in TNA and he did well during the match.

The normal routine of the heels having the numbers advantage was worked to great effect here and there were even times when you thought there was no way that Team TNA was going to be able to overcome them.

While I didn't agree with Aces and Eights losing because I didn't think they'd been made to look all that strong recently, I did like the insane ending involving Eric Young. 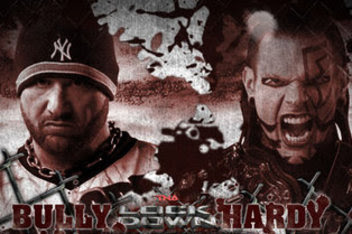 Finally the main event is here.  The heavyweight champion Jeff Hardy put his belt up against Bully Ray.

The match itself was really good between Hardy and Ray.  Both of whom hit their signature moves and really had the crowd eating out of the palm of their hands.

At one point, Brisco and Bischoff came down to the cage to stop Hardy hitting the Swanton Bomb on Bully Ray but they both fought the pair of Aces and Eight's members off.

One of the highlights of the match for me was when Bully Ray hit a top rope sitout powerbomb on Hardy.  It looked absolutely brutal and like Hardy had been broken in half.

In a swerve ending the Aces and Eights came down to break up the match before Devon threw a hammer to Bully Ray.  Ray then smacked Hardy with it and pinned him for the win revealing that he had been working with them all along.

While I wasn't all that impressed with the end of the match, it does open up some good possibilities for the Aces and Eights storyline itself.  Maybe now with Bully Ray as the mouth piece the stable will be made to look a lot strong  than they have done recently.

Bully Ray pinned Jeff Hardy after hitting him with a hammer.

After the match Bully Ray proceeded to berate the crowd before revealing that he was in fact the president of the stable.  The crowd were massively pissed by this and threw bottles and everything at the guys in the ring.

All in all, a very hit and miss PPV by TNA.  While there were a couple of good matches, none of them really stood out after the PPV ended.

However I did like the opportunities opened up by the reveal of Bully Ray as a member of Aces and Eights so let's see where this is going to go from here.