The Way We Write: A "Her Name Is Calla" Adventure Review 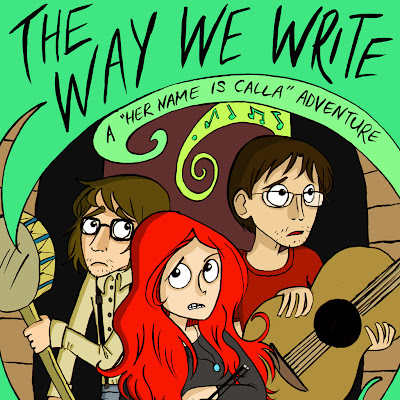 Tom, Adam and Sophie of band 'Her Name is Calla' are going on a writers retreat to Whitby.  It'll be perfect - it's in the middle of nowhere, no distractions, just them and their music for a whole week.  What could possibly go wrong?

'The Way We Write' is a hard comic book to put in to an category.  There are elements of a good, old fashioned mystery, a self referential comedy and even a supernatural tint to it.

Normally that would make for a disjointed comic book but that's not the case here.  In fact, Rachael Smith has crafted a comic book that is all of those things and much more.

Known for her feline creation 'Flimsy', Rachael Smith has written a comic book featuring three members of the real life band 'Her Name is Calla' going on a writing retreat to write some new material and get in some much needed rest and relaxation.

'The Way We Write' is best described as Daniel Clowes writing and illustrating a 'Scooby Doo' comic book.  As a debut comic book, this couldn't have possibly been better.  It's a superb debut and definitely makes for a fun read.

Moving along at a cracking pace, the story itself is really flies off the page at the reader and drags you in to wanting to get to the next page to see just what is going to happen next.  I really loved each new page as Smith's style of art really makes the story vibrant and feel alive.  Same with the writing.  As well as having a solid  mystery to it wrapped up in a haunted house story, 'The Way We Write' is absolutely hilarious and had me in hysterics more than once.

All in all, this has shown one thing.  Rachael Smith is one hell of a writer and artist and definitely one to watch in the comic book world.  I, for one, will be keeping my eye out for any more of her comics and also for music by 'Her Name is Calla' after reading this.