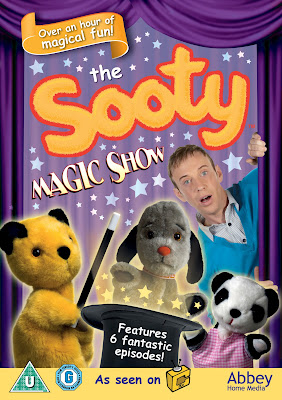 A broken wand forces Sooty to stop his magic show. With Sweep stuck in the sawing-in-half box and Richard transformed into a chicken, Sooty must put things right if he's going to impress World Famous Magicians Paul Daniels and Debbie Magee .......

As a man who grew up watching Sooty in the 80's, I was extremely pleased when I heard there was going to be a new series starring the loveable yellow bear, especially now that I am a father myself.

While it's never going to be as good as the Harry Corbett or Matthew Corbett years, Richard Cadell has done a bang up job of introducing the legendary bear to a whole new generation of children.

Cadell bought the rights to Sooty and since June 2008, has worked tirelessly to bring the characters back to the world of television and he has succeeded really well here.

Here on this release are 6 funny episodes starring not only Sooty but also Sweep and Soo as well as a special guest appearance from Paul Daniels and Debbie Magee.

The comedy here is broad and in a relatively old fashioned slap stick style but that really adds a layer of charm to proceedings.  Many of the moments on this DVD had my little lad absolutely howling with laughter at the various hijinx that the group was getting up to.

Richard Cadell really adds a hell of a lot of enthusiasm to the show and that absolutely shines through and makes the children watching feel like they are watching a group of friends going on various adventures and mishaps together.

As a father, my personal favourite part was Sooty dressing up as the Stig from the television show 'Top Gear' before driving his mini camper van really quickly.

All in all, I really enjoyed watching this DVD with my little lad and so far, in the two weeks I've owned this DVD for, he has watched it at least once each day and still laughs hysterically each time.

Well worth picking up for the Sooty fans out there. 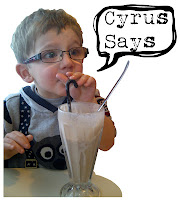