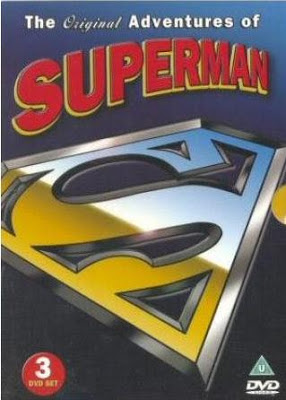 "Faster than a speeding bullet! More powerful than a locomotive! Able to leap tall buildings at a single bound, this amazing stranger from the planet Krypton, the Man of Steel - Superman."

In 1941 Fleischer Studio's in Hollywood launched a series of Superman cartoons in the movie theaters of the USA.

These became a fast and popular hit with the movie going public. The short stories are exciting, fast paced and edited with such finesse that even though there's a lot happening on the screen at the same time, you never once feel lost.

While the stories themselves don't have the rogues gallery that Superman is famous for, that doesn't matter thanks to the quality of the writing. There are cursed mummies, mad scientists and even an evil Japanese army for Superman to fight.

Each story is completely separate so can either be watched all in one sitting or in little bite sized chunks.

The score for each of the stories by Sammy Timberg really punctuates the action on the screen without being intrusive. Also the score really gives this classic tales a real golden age of Hollywood feel.

The transfer is pretty good considering the age of the material. It does struggle in some places but the transfer for the sound is brilliant. Sometimes with old movies and / or cartoons the sound comes across as having a tinny quality to it. While every now and then the sound does have a little moment like that, over all it's very good.

It's a spoof cartoon called 'Snafuperman' that was made by the US Army Signal Corps as a way of raising the moral of the troops. Sadly, out of the 26 that were made, only one is included here but it's an absolute brilliant addition to the set.

Posted by Pat Scattergood at 00:14