The Destiny of Dragons: Book One - The Book of Wrath by Billie-Jo Williams 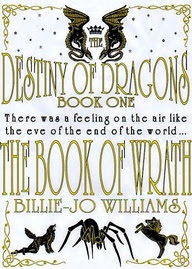 Damned by greedy Emperor Azmyth and his weak heir, Prince Len, the Imperial Capital of Ay is winked out in one terrible moment by the mysterious Dark Destruction. Ill prepared for the rigours of leadership, Prince Len leans upon Kai Canarbis, his Personal Protector, but as Kai spirits the unworthy Imperial Heirs through the disintegrating Empire, in search of sanctuary and support, they have to endure the karma of the Vallely dynasty’s crimes.

Caught in arrogant, naive Len’s web, Kai seeks to disentangle his master out of an impending sticky mess, his only reward being his blossoming romance with Princess Anna. However, having been badly wounded by the herald of the Dark Destruction, even the incredibly accomplished Kai falls victim to circumstance.

A desperate, but doomed quest to save the Empire leads across land, sea and ice, into Enemy-occupied territory, but as the unfathomable Dark Destruction continues to ravage the realm, there may not be an Empire remaining for anyone to claim…

I'm always dubious when I pick up a new fantasy book because, just recently, they all seem to be cliched and unimaginative, which for a book in the fantasy genre is idiotic at best.

That is most definitely not the case here.

Billie-Jo Williams is a writer with a massively imaginative mind and, here, has created a rich and varied world so full of life that it's hard to realise that the places here don't actually exist.  It's the same with the characters, they are so well written that they honestly feel like real people and that you, the reader, are just watching them go about their lives albeit in a fantastical realm.

One of the things that struck me the most about Williams' writing is how original her style is.  There's a darkly cynical feel to her writing that sometimes gives way to being quite nihilistic in places.  That's not to say that the book isn't enjoyable, it really is.  It's just that the dark, cynical edge to it makes it incredibly unique in a genre so used to just coasting along and banging out the same old cliches over and over again.  While dark, the story itself has two things bubbling under the surface.  One is a feeling of dread, like a massive world changing event is about to happen but there is nothing that anyone can do about it.  Yet the other thing is that somehow, through it all, there seems to be a feeling of hope running alongside it.  Not many writers can juggle that sort of string throughout their story but Williams' does it with the skill and slight of a hand of a old veteran of the fantasy scene.

Character wise, this book stands head and shoulders above the plethora of fantasy books that are so readily available thanks to the world of electronic publishing opening up avenues for new and old writers.  The characters here feel like they are right in front of you and living and breathing.  I also liked the near complete lack of cliches here as well.  Yes there is a prince in the story and yes he is to inherit the kingdom.  Is he the perfect hero who'll save us all?  Hell no.  He is a completely selfless and quite frankly useless alcoholic who, one more than one moment, barely escapes with his head attached to his shoulders.  I really liked that  for once the prince wasn't a handsome, dashing, do everything right kind of a guy.

The best character by far however is Kai Carnabis, charged with basically protecting the ruler and his family, yet there is much more to the character than that.  I don't really want to go in to too much detail as there are tons of twists and turns that really surprised me, as a reader, and I don't want to spoil it for any of you guys and girls out there.  That said, there is one problem with Carnabis.  Williams' spends too much time saying how good this guy  is when I think it would have been a little more affective if there had been a bit more mystery to the character and his abilities.

One of the complaints I've read about this book is that the author spends too much time describing things and not showing them.  I actually liked that approach and I don't think that she has done that half as much as people have made out.  If a fantasy book is battle after battle after battle then I get bored in all honesty.  I want time for the characters to develop.  If they have a history or a past, you don't need to show them in the battles or fights that have made them in to who they are.  Sometimes just a nod to the past is enough if done well and Williams' has most definitely done that well here.  Very well in fact.

All in all, if you are a fantasy fan then I think you honestly will like it.  She has a bit of a Mercedes Lackey feel to her writing only it's a bit more bitter and cynical.  The worlds here are fantastical and well thought out and the characters are well rounded and exciting.  What more could you want from a fantasy novel?

Posted by Pat Scattergood at 16:24