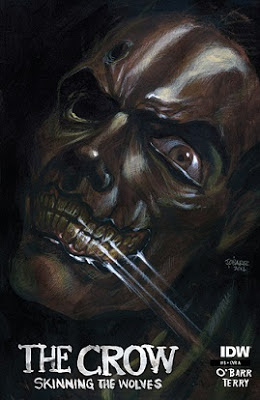 With the camp in chaos and bloodshed, the Crow moves in for the final stage of his deadly chess game with the Commandant. Layers of tragedy are peeled away as the mystery of his death and the catalyst of his vengeance are revealed-it is the Endgame, and the Crow will not rest until his mad thirst for retribution is sated...

This one is definitely one of the brilliant ones.  While issue one had it's flaws and issue two was a vast improvement, this issue really streamlines the story and builds to a great resolution between the two main characters.

James O'Barr always has had a knack of crafting a good and exciting story but with an emotional core to it and that's no different here.  To place a story such as this in the era of the Holocaust was a brave move.  It could have come across as cliched and played out but that's not the case here at all.  In fact, O'Barr has made a really emotional and exciting story out of that idea.  It's not as good as the original but then again, I don't think anything could be.  That was definitely a 'lightning in a bottle' moment that can't be repeated.  However, O'Barr comes very close here.

The story itself is paced superbly and the ending really hits home hard.  I also liked the fact that it was a bit open ended but not in a cliched way either.  I would love to see more of the 'Crow' character from this mini series but at the same time, it's well ended as well.

The artwork has always been of a high standard through out all three of the issues.  Here is no different.  Jim Terry manages to mix a stark and forboding feeling through out the issue with his art but also gives a 'balls to the wall' feel to the action scenes as well.  It's in the 'wrap up' scenes that he absolutely excels at.  During the reveal of what exactly happened between the 'Crow' and the Commandant, the art plays a massive part in showing the fear and sense of dread felt by the characters.

Definitely one to pick up for both fans of 'The Crow' but also for fans of comic books that are well written and exciting.