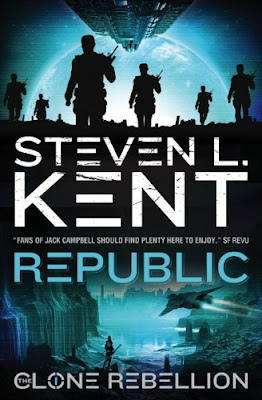 Earth, 2508 a.d. Humans populate the six arms of the Milky Way Galaxy. The oppressive Unified Authority controls Earth’s colonies with an iron fist, stamping out revolt with a powerful military made up almost entirely of expendable, mass-produced clones.

Private First-class Wayson Harris was raised in a Unified Authority orphanage among thousands of clones, bred to be the ultimate soldiers. But unlike the other Marines, programmed to obey first and think later, Harris has a mind of his own. When he fends off an attack from a rogue general, Harris is thrust into the middle of a galactic conflict that forces him to question his existence as a weapon of the U.A., and the cost of rebellion.

As a massive science fiction fan, I've heard some very good things about this series of books.  A massive series of  nine books, Steven L. Kent has attempted to craft an epic tale about power, rebellion and politics.  Has he succeeded?

He most definitely has.

Here, in this the first book of the series, Kent has crafted a well paced, exciting and full of twists and turns that really keep the reader guessing until the very last page.

The intelligent writing manages to mix the politics side of the regime with the sheer balls to the wall action of the action set pieces brilliantly.  I would have thought that trying to mix the two would have ended up with quite a disjointed story but not here.  In fact, each part of the story is connected superbly.  However it's in the details that Kent shines.  Every little thing, no matter how unimportant they seem at the time, all add to the bigger picture of corruption, absolute power and war.

While not all parts are 100% successful, there were a couple twists and turns that seemed a little cliched when compared to the rest but that's a minor flaw.  Besides, not all twists and turns can be 100% shocking or have the 'wow' factor.

Characters wise, there are a couple here that could have done with a little bit more background or been given a little bit more detail but for the most part the characters are really well done.  Kent's style really works with his characters.  In lesser hands a couple of characters could have been really cliched, like the clone who hates clones or the superior who's a hard ass but shows a kind side, but with Kent's style over comes that and you end up really caring about what happens to them.

So, while this book isn't the perfect science fiction story, this is most definitely a great start to the series and I'm eager to start reading the 2nd one in the series to see what ends get tied up and see what happens after the shocking revelations that were revealed here.

Posted by Pat Scattergood at 12:07