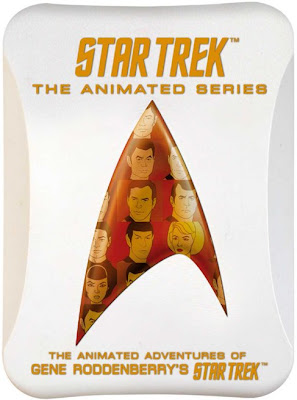 Based on 'Star Trek' Created By Gene Roddenberry

This is the further adventures of the Star Trek series in a half-hour animated form. This show continues the adventures of the original series, but takes advantage of the unlimited special effects provided by animation to introduce more alien crewmen (the felinoid M'Ress and the tripedal Arex) as well as introduce more elaborate adventures like an underwater adventure, the miniaturisation of the crew to 1 cm., and the appearance of a giant fire-breathing two-headed dragon. The animated series includes the beloved characters in new adventures...with all characters voiced by their original actors.

This, the complete animated series, is often thought of as the fourth series of the original series, featuring nearly all of the cast from the show.  Sadly, Chekov is not included here due to budget issues but he's not forgotten.  Walter Koenig, who played Chekov, wrote the episode 'The Infinite Vulcan', becoming the first 'Star Trek' cast member to ever write a 'Star Trek' story.

The animation is very similar to the style used in the older 'Scooby Doo' cartoons but don't let that put you off however.  Here that style works brilliantly well.  In fact, the series being animated gave the writers and animators a lot more leeway with their stories than they would have had with the live action series.  The gadgets are more impressive, the stories are even given more of a science fiction edge by being able to place the action pretty much anywhere.

Also for you 'Star Trek' trivia fans, this is the series that revealed James T. Kirk's middle name to be Tiberius.  The name then went on to be used in later live action productions.

Story wise, there are some absolutely brilliant stories here.  A lot of the background information about the characters here have gone down in 'Star Trek' lore and many of the episodes have gone on to be referenced in later series as well, especially in the 'Deep Space 9' series itself.

Other than the lack of special features, which is a real shame considering how interesting this series is, but when the episodes are this good, you kind of forget about little things like that.

One of the things that really impressed me was the transfer for the sound and the picture.  Both are clear as crystal, which considering the age of the series is testament to just how good a job they did here.

Posted by Pat Scattergood at 04:44