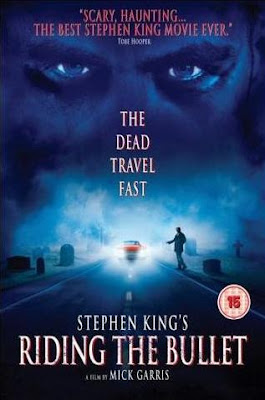 Alan embarks on a 100-mile hitchhike to see his mother in hospital. Along the way he must confront his many demons - both living and dead - and in the end make the ultimate choice that will mean life or death for him and his mother!

Tobe Hooper, the legendary director of 'The Texas Chainsaw Massacre', described this as the best Stephen King movie ever.

He was very wrong. That or he was watching a completely different movie to the one that I have just had the displeasure of sitting through.

After an accidental suicide attempt, Alan discovers that his mother has had a stroke and is therefore in hospital. After deciding to hitchike to see her, he sees lots of ghosts and personal demons on the way.

A relatively simple novella by the king of horror Stephen King has been adaptated by Mick Garris. Garris is famous for have done many King adaptations in the past with varying degrees of success.

This is definitely not one of his successful ones and in all honesty, I would class it as his worse by far.

The story itself is incredibly badly presented here and therefore a lot of the things that happen to Alan make little to no sense. A lot of them even go completely unexplained, which then leaves the viewer wondering what the hell has just happened.

The characters don't really seem to do a whole lot other than make really bad 60's references seeing as this is set in that decade. Pretty much every 60's cliche is used.

The only two highpoints in the movie, and considering the sheer majority of low points in this movie the fact that there are any at all is amazing, are the performances by Jonathan Jackson and an remarkably creepy performance by David Arquette. Other than that, the rest of the cast seem to be going through the motions, including the normally brilliant Barbara Hershey.

The special features, including the commentary, are nearly as dull and disjointed as the movie itself. I had to turn the commentary off after about half an hour as I find it mind numbingly dull. That's why I have given it the lowest score, which is normally reserved for movies with no special features at all.

I would definitely avoid this absolute pile of dross and watch the many, much better Stephen King adaptations out there and leave this one on the rental shelf to gather dust.

Posted by Pat Scattergood at 13:38