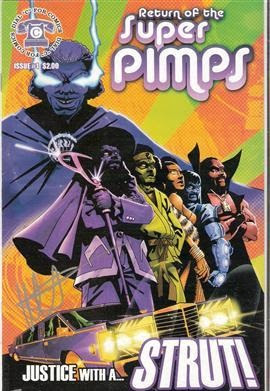 The year is 1979, and the Super Pimps do battle with their greatest nemesis, Darquefire!

But when tragedy strikes, the heroes go their separate ways and their ‘Hood, once an urban utopia, decays into a ghetto wasteland.

Now, almost thirty years later, a mysterious figure with strong ties to the Super Pimps embarks on a quest to reunite the forgotten heroes, while a familiar evil returns to what’s left of The Hood…

When I first saw the title of this comic book, I wasn't expecting it to be all that good if I'm going to be brutally honest.  I thought it was going to be hokey and groan inducing.

Boy, was I wrong?

Instead what we have here kind of reads like a tribute to a time gone by yet still stands up to date with some of the best comics out there.

The story itself reminds me a bit of 'Shaft' meets the 'Avengers' and that, believe it or not, is a very good thing.  You can really see the love the writer has for the original era of the 'Super Pimps' team and for having a good time.  The blaxploitation theme may not be a new one by any stretch of the imagination but it's really used to good effect here.

Is this a dark and gritty comic book?  No but it is bloody exciting and very well written.  Not only did the writing have me laughing more than once but it also had me wondering what was going to happen next.  Hell, what more do you want from a comic book?

The art here is completely and utterly brilliant.  In fact, the first few pages really bring the characters to life along with the time period.  There are so many touches and little details that really ramp up the level of quality in Carpintero's work here.  My favourite of these being the single tear falling on to a heroe's mask.  In some hands that would have come across as hokey or cliched but here, it's drawn beautifully.

This release has taught me one thing for sure.  Don't write off a release just because you don't like the title.  You could be missing out on something really good.