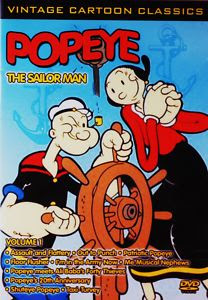 These classic children's cartoons from yesteryear feature the original cartoon heroes that have thrilled generations of cinema audiences from the black and white era to the glories of colour.

Now remastered for DVD, these great characters have been given a new lease of life and will inspire children of all ages.

Collected in this collection are

Popeye the Sailor Man is a legendary character that started life as a comic book strip and then was turned in to a legendary series of cartoons by the Fleischer Studios.

Here is a collection of some of those cartoons in all their glory.

The best of these is by far the cartoon 'Me Musical Nephews', which for the fans out there is one of the perfect examples of why Popeye became so incredibly popular.

The humor here is major league but old fashioned slapstick and works in spades.  The best way to describe the comedy would be to compare to the old 'Tom and Jerry' cartoons that we all grew up loving and laughing at.

Animation wise, it is crude in places but definitely classic at the same time.  The black and white cartoons in this set are beautiful and the color ones are bright, cheerful and very easy on the eye.

The transfer picture wise is a little ragged around the edges but that's mainly due to the sheer age of the film used here and in all honesty, I think they did a pretty good job.  It could have been clearer in places but that's a minor quibble.

It's the same with the sound.  It's a good transfer sound wise and works really well.  There's some crackling in the background but you get that with pretty much any release of this age.

All in all, this is a great release and a superb introduction to the world of Popeye.

Posted by Pat Scattergood at 11:07