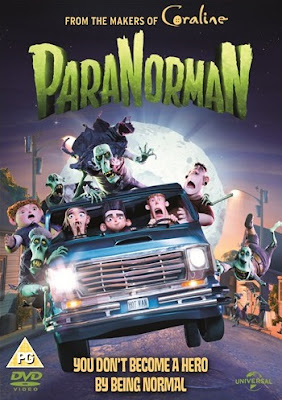 In ParaNorman, a small town comes under siege by zombies. Who can it call? Only misunderstood local boy Norman (voiced by Kodi Smit-McPhee), who is able to speak with the dead. In addition to the zombies, he'll have to take on ghosts, witches and, worst of all, moronic grown-ups, to save his town from a centuries-old curse.

But this young ghoul whisperer may find his paranormal activities pushed to their otherworldly limits. Following LAIKA's groundbreaking Academy Award-nominated animated feature Coraline, ParaNorman is only the second stop-motion animated feature to be made in 3D.

'ParaNorman' is brought to us by the creators of the superb movie 'Coraline' but is it as good as that release?

'ParaNorman' is one of the funniest and most original children's movies that I have seen in a very long time.  Both I and my little boy absolutely loved it.

I would say however that it's not really appropriate for the really little ones as there are some quite scary scenes in it but for the older ones, it's an absolute gem of a movie.

Animation wise, I honestly think it looks even better than 'Coraline' and during the massively exciting scenes involving Norman's dealings with the zombies, the animation absolutely shines through and makes it look amazing but that's not where it's the strongest.  That's on the quieter, dialogue heavy scenes.  Norman really shines here and comes across as a little boy that just wants to be treated as normal despite his gift.

Out of all the characters however, Aggie is by far the best.  Her character starts off as angry because of all the things that happened to her but thanks to the very clever writing, her story soon actually moved me to tears.  She became such a sympathetic character that, if she was real, you would have just wanted to put your arms round her and  say that everything was going to be OK.

One of the main points of the story is that no matter how different someone is that they should be treated the same as everybody else.  I think this movie really puts that message forward without slipping in to cliche.  That's especially true of one of the characters when he reveals something about himself in a brave bit of writing by the writers.  They do the line in a throwaway manner, which I think is superb because it means the characters don't make a big deal of it.

The special features, while interesting, are a little disappointing in that there aren't very many of them.  I would have liked to see a lot more about how they made this brave and original movie or about the cast itself.  However, the features we do have are really good so it's a matter of quality over quantity.

All in all, I would highly  recommend this movie.  It's fun and really can be enjoyed by children as well as their parents.  There are lots of laughs that the parents will get as well as a hell of a lot of fun that will be had by the kids themselves.

What a great movie.

Posted by Pat Scattergood at 00:30