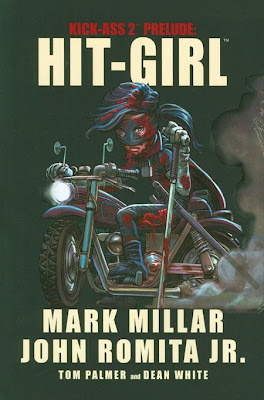 Mindy McCready has mastered a hundred ways to kill a man.

Her father, the superhero known as Big Daddy, made sure of that.  She's used her skills to wipe out mobsters, super-villains and more.  So why does facing the popular girls at middle school feel like her toughest challenge yet?

With Big Daddy now gone, Hit-Girl tries her hardest to make good on a "normal" life with her mom and stepdad.  So she strikes a deal with fledgling superhero Kick-Ass: she'll train him to stay alive, if he'll teach her how to fit in with the other girls at school.  But with a new mafia don on the rise, being normal may just have to wait.

Mark Millar and John Romita Jr. pull back the curtain on Hit-Girl, the world's deadliest 12-year-old, in this prelude to Kick-Ass 2!

After reading the original Kick-Ass graphic novel and then watching the movie, I was very eager to see what was going to happen next.  While this was released after the Kick-Ass 2 graphic novel, the events here take place before that release.

Now what do we have here?

In fact, if you are a fan of the original Kick-Ass graphic novel then you will love this release.  The character of  Hit-Girl hasn't been diluted one little bit, which was my fear before I read this release.

The trademark humor of Mark Millar is here in absolute spades.  One of the best moments in this graphic novel are the hilarious monks that are training the soon to be 'Red Mist' to be a lean, mean, fighting machine.  This leads to all sorts of Christopher Nolan's 'Batman' references.

Story wise, this one bridges the gap between the first graphic novel and the second really well.  The thing that annoyed me about the 2nd graphic novel was the distinct lack of Hit-Girl and that the opening just didn't seem to fit in but this release really fixes that in a superb way.  In fact, they are combining this release with Kick-Ass 2 to make the upcoming movie.

The art by John Romita Jr. is once again absolutely fantastic and in keeping with the high standards of quality set by the first graphic novel.  The gore soaked pages absolutely fly at the reader and really force home the violence in  the story.  There is a hell of a lot of humor in some of the killings and the art here really brings that to life.

All in all, this is a brilliant release and if you are a fan of the Kick-Ass graphic novels then this is an absolutely essential purchase but you probably already knew that didn't you?

Posted by Pat Scattergood at 15:25