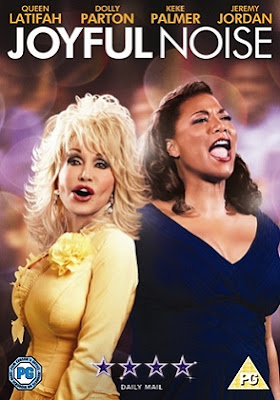 Written and Directed By Todd Graff

Oscar nominees Queen Latifah and Dolly Parton star in this funny and inspirational story of music, hope and love. Their small Georgia town has fallen on hard times and is counting on the church choir to lift everyone's spirits by winning the national Joyful Noise Competition. But discord between the two leading ladies threatens to tear everything apart when Vi Rose (Latifah) plans to stick with a traditional style, while fiery G.G. (Parton) wants to shake things up in a big way!

When I first saw the reviews for this movie over on the IMDB website, I was fully expecting this film to be absolute dross.  In fact, a lot of the reviews there absolutely butchered the movie to such a degree that my expectations couldn't have possibly been any lower.

I'll be honest with you guys and girls.  Those reviews were completely wrong.  To a massive degree.

Is this movie a world beater of a film?  No.  Is it an enjoyable couple of hours?  Hell yes.

As a massive fan of musicals, I love a good song and dance movie.  This one takes the genre of gospel music and really lets fly with some absolutely fantastic songs and performances by the cast, that includes the legendary singer Dolly Parton.

The songs themselves are really emotional and well performed.  Especially by Jeremy Jordan.  To be honest, I had no idea who he was before this movie but he has a fantastic voice.  However, it's the chemistry between Parton as G.G. Sparrow and Queen Latifah as Vi Rose that really forms the heart of this gentle but fun movie.

The way those two play off one another is a brilliant thing to behold and between them, they get most of the best lines in the movie but that's not to say the rest of the cast don't hold up their end of the bargain.  Far from it.  Each part, no matter how minor, has been given to a person that really inhabits that character makes them memorable.

The best of these by far is the performance of Dexter Darden who plays Walter Hill, a young man with Aspergers Syndrome.  As a friend of a couple of people with that syndrome, I really think that Darden himself absolutely nailed it on the head.  He gave a truly sympathetic performance without falling in to melodrama.  In fact, when ever he was in the scene my whole attention was on his performance no matter what was going on around him.

All in all, while this isn't the best musical I have ever seen, it was however a very well thought out and performed movie.  The cast do a great job and the songs are beautifully song.  Plus you have  that brilliant performance by Darden as well.

Well worth giving a look.  In a bit of trivia for you movie fans out there, this was Dolly Parton's first big screen role for 20 years.

Posted by Pat Scattergood at 10:42