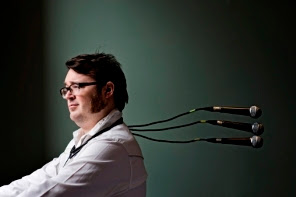 You've seen him on Mock the Week, 8 Out Of 10 Cats, Argumental, Dave's One Night Stand, and dancing as Madonna on Let's Dance for Comic Relief. He's the guy with the sideburns and the glasses... That's right, it's Jarred Christmas. Fast, funny and in demand. Let's Go MoFo!

After seeing Jarred Christmas on many different television shows as well as watching him host a myriad of shows for Dave's Leicester Comedy Festival, I had really high hopes for this show.

And let's be honest, this show lived up to those hopes and then some.

Advertised as an hour of comedy, what we actually got was just over two hours of hilarity from the man with the sideburns.

Jokes came thick and fast with the kind of confident delivery that only Jarred Christmas can muster.  His unique blend of stories about his life and sheer random jokes had the crowd howling with laughter.

Christmas has this talent of making the crowd feel like they are completely part of the show and now many comics these days have that.

The show started with Christmas coming out on to the stage, leaping off and then doing the Haka dance in front of one of the members of the crowd at the front.  From then on we all knew what to expect.

One of the running jokes throughout the evening was that he'd wanted to do a night of comedy and dance but everyone only wanted the comedy so at random intevals he would break in to dance.  We had the dance from Dirty Dancing, a dance set to 'Eye of the Tiger' by Survivor and he even did the dance to 'Gangnam Style' as well, which to be honest had me crying with laughter.

Christmas then came out for the second half of the show.  He'd apparently planned for one hour instead of two but you wouldn't have known that from the confident performance he continued to give.  Bordering between more jokes, taking questions from the crowd as well as getting the audience to join in, the unplanned half was hilarious.

All in all, this was a great night and I would definitely come out to see Jarred Christmas again and I urge you guys to do the same.