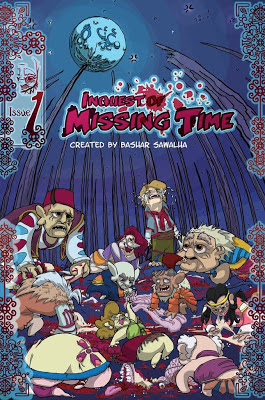 When the care for a group of immortal orphans ceases to exist, they walk out of their nest to break free from the womb that nurtured them for half a century. Slowly discovering the dark secrets of their existence, Cebriel struggles with this new-found understanding of death as the group's hunger for life grows for its prey.

I have to admit here guys and girls that this one is a very hard one to review.  In fact, I'm not even all that sure where to start.

The story itself in this issue doesn't really give all that much away yet somehow manages to leave the reader with a sense that is part amusement and part dread.  I'd even go so far as to say that there is an underlying sense of forboding, like you know the shit is going to hit the fan but you're just not sure when.

There was a hell of a lot I liked about this comic.  The story itself has me very intrigued.  I want to know what is going to happen to the orphans, I want to know some more of their backstories.  I also really liked the incredibly dark humour that was running beneath the surface.  I think the best way to describe it would be that it's the same sort of dark humor that is pervailent in movies such as 'Basketcase' and 'House' but also in more recent fare such as 'Severance' and that's a really good thing.  In fact, that is one of it's main strengths.  You find yourself laughing at something on the page and then you realise just what it is you're laughing at.  That's when it hits you right in the face with the horror side of things.

The art is absolutely superb, balancing on two lines perfectly.  On one hand you have the sharp and detailed work that really draws the eyes to the gore on the page but at the same time it has a slight cartoony slant to it and I haven't seen someone walk the line between the two types so well in a very long time.  I hadn't seen Sawalha's work before but now I've seen this I will definitely be keeping an eye out for more.

I know I haven't given away very much in terms of story or anything like that about this release but that's because I really don't want to ruin any surprises this issue may bring for the reader.  It's a title that can be read on many levels and I really think that it deserves a much bigger fanbase.

Posted by Pat Scattergood at 13:08