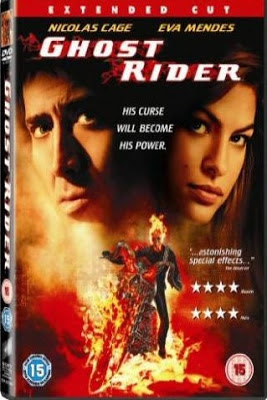 
Johnny Blaze (Nicolas Cage) was only a teenaged stunt biker when he sold his soul to the devil (Peter Fonda). Years later, Johnny is a world renowned daredevil by day, but at night, he becomes the Ghost Rider of Marvel Comics legend.

The devil's bounty hunter, he is charged with finding evil souls on earth and bringing them to hell. But when a twist of fate brings Johnny's long-lost love (Eva Mendes) back into his life, Johnny realizes he just might have a second chance at happiness - if he can beat the devil and win back his soul. To do so he'll have to defeat Blackheart (Wes Bentley), the devil's nemesis and wayward son, whose plot to take over his father's realm will bring hell on earth!

Review
The Marvel Comics character 'Ghost Rider' has always been a favorite of mine due to the fact that he, as well as 'Batman', was one of the first comic book characters that I started reading.

While I'm not going to lie and say I loved it, neither did I hate it either.

This isn't the portrayal of Ghost Rider that I wanted to see as a big screen outing in all honesty. While the special effects were good on a technical standpoint, Ghost Rider himself just looked too clean. He's meant to be a dark, grimy and menacing character but here the character just seems too clinical.

Another problem is with Nicholas Cage's performance. He just plays it far too safe. I like the Ghost Rider stories where both Blaze and his alter ego are a bit off kilter but he really does play it safe. That's not the Nick Cage we're all used to. We're used to the Nick Cage that plays bat shit crazy so well that it makes the various incarnations of The Joker seem completely sane.

However, there are two standout performances for me. Sam Elliott, who seems unable to put a foot wrong whenever he is in a movie and the legendary Peter Fonda. Two absolutely fantastic casting choices who really seemed to inhabit their characters.

The worst casting by far was Eva Mendes, who in my eyes is one of the most over rated actresses that I have ever seen. The only way her character could have been any more boring would have been if Tara Reid had been cast.

All that said how ever, while it's true this movie can be seen as a bit of a guilty pleasure, neither is it as truly awful as it's been made out to be. It's a bit like the 'Green Lantern' in that while it wasn't perfect, nor was as bad as you may have heard.

Ignore the reviews you may have read, turn off your brain and enjoy a explosive yet fun movie.

Although I do have one question.