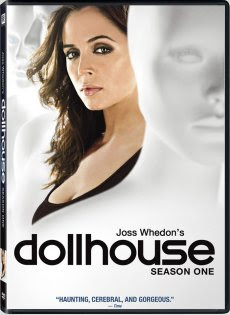 Dollhouse explores the lives of an underground group of beautiful and seductive young people known as “Dolls”. These men and women have sold their bodies and minds to the Dollhouse – for a period of three years, their minds are repeatedly wiped blank by the house’s programming expert Topher (Fran Kranz Training Day, Donnie Darko), and can then be imprinted with an infinite number of different personalities. In this way they become (for the right price) the perfect partner, the perfect assassin, or the perfect plaything for Los Angeles’ super-rich.

Unfortunately, however, the programming technology is far from perfect, and as the series progresses the house’s most popular doll Echo (Dushku, Tru Calling, Buffy the Vampire Slayer) starts to remember glimpses of her past engagements, and the woman she once was before she entered the house…

Review
Joss Whedon is known in television circles for creating some absolutely brilliant shows.  'Angel', 'Buffy The Vampire Slayer' and 'Firefly' were all very entertaining and had some fantastically intelligent scripts while remaining a hell of a lot of fun.
Here Whedon gives us some of the same and yet for some reason it comes over as feeling a bit uneven in places.  That's not to say that it's a bad show because it's not.  It's actually really good but for some reason it just doesn't gel as much as it should.
That said however, it is a very exciting ride that takes a little while to get going but when it gets near to the end of the season, the pace is massively ramped up and leaves you eager for season 2.
The cast here do really well with the characters and the dialogue that they're given.  Some of the characters don't work as well as they should because there seem to be a few omissions back story wise but hopefully those little holes will be explained in the second season.
Whedon fans will notice both Dushku (famous for her roles in both 'Buffy' and 'Angel' as the slayer named 'Faith') and Amy Acker (famous for her role as 'Fred' in 'Angel' but for us science fiction fans there is also Tamhoh Penikett (famouse for his role as 'Helo' in the newest version of 'Battlestar Galactica') and Alan Tudyk (famous for his role as 'Wash' in 'Firefly' and 'Serenity', both Whedon creations).
While the cast do really well, for some reason I just couldn't connect with some of the characters and couldn't really care about what happened to them.  That's a real shame because the air of mystery that surrounds the 'Dollhouse' really make you eager to watch the next episode to see what will happen next.  The best way to describe it would be that the show is kind of in a type of limbo.  All the pieces are there to make a brilliant show yet for some reason they just don't all go together.

Special features wise, there are some great and very interesting featurettes here as well as an entertaining commentary from Whedon himself.  He also seems to go the extra mile whenever he does commentaries and it's no different here.

All in all, while this is a show that was still finding it's feet until the last couple of episodes, it's still worth picking up.  The cast have some familiar faces and there are some great twists along the way.  Personally I'll definitely be picking up the second season.