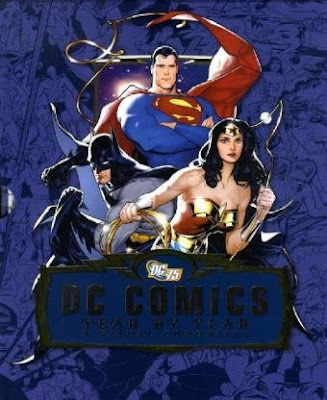 
A century-spanning voyage through seven thrilling decades of DC Comics. Packed with original comic-book art and key character profiles, including Batman and Superman, DC Comics Chronicle is vibrant and visually spectacular. Follow this chronological guide to both the characters and the company that created them.

This book is a bit of a hard one to review if I'm completely honest.  If you aren't a comic book fan or a DC fan then no matter what I say, you will have no interest what so ever in this book.

However if you are a comic book fan then you are most certainly if for a treat with this massively
informative book.

Is it a perfect book?  No, there's no way you could get 75+ years of comic book history in to a 300+ page book without there being things that you have to gloss over or only mention briefly and that's the case here.  Some of the choices for things that have written about in detail are a little bit strange but that's down to the number of writers there were on this release.  Not every writer is going to think the same things are important but that's just life.  Some of the things you think would be spoken about in more detail aren't and vice versa but that's not too much of a flaw because what is written is very well thought out.

The writers we do have here however are wisely chosen.  They really do know their stuff in and out so the different sections are at the very least extremely well written.

The book itself is bright, colourful and very well presented.  I especially liked the fact that it came in a hard slip case and that there were some prints that came with it too.  That was a nice surprise when I opened the book.

All in all, this is a massively informative and very interesting book.  It may not be the perfect look at DC Comics but it is definitely well worth picking up if you are a comic book fan or a DC fan.

Posted by Pat Scattergood at 06:19