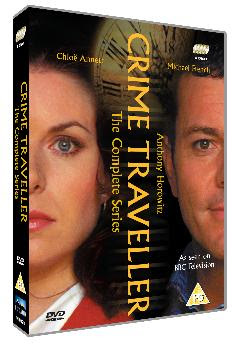 Meet the most unconventional investigative duo of any time - Jeff Slade and Holly Turner, in the mystery adventure series Crime Traveller.

Sleuths come and go, working on intuition, luck and clues, but Slade and his science officer colleague Holly are armed with something extra in their fight against crime - their very own Time Machine. High speed chases and intriguing puzzles are solved with the aid of their unreliable Time Machine, in this stylish, fast-paced drama.

This 8 episode late 90's BBC show is a must see DVD set, sadly for all the wrong reasons ( I'll explain later)

Jeff Slade is a British cop, a maverick who goes by instinct not rules ( seem familiar? ).
Holly Turner is a forensic scientist who works for the police.

One day Holly sees Jeff is in trouble because his maverick ways have ruined a case, so she tells him about a time machine she has that can send you back in time by varying amounts, but not the forward to the future as it doesn't exist yet (I know what you're thinking, I agree). Using this handy gadget they can then solve the crime before it happens, but there are rules,

You can't meet yourself

You can't change the past

You must be back at machine by the time you left

If you break any of these rules Very Bad Things will happen.

So begins one of the best programmes of the 90's, or it would have been if the budget had been higher than £2.50. You can see a germ of greatness in these episodes but it never grew, problems are sub Dr Who special effects, massive plot holes and some seriously dodgy acting, but I love it.

I won't go into separate episodes but suffice to say you'll enjoy them all.

A fine example of BBC trying to do an American style show on a shoestring budget, it never got a second series as not long after a little show called Jonathan Creek came along, maybe it's time to try again?

If you can find this set get it, you won't regret it .