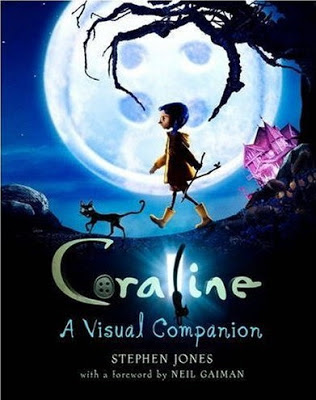 Written By Stephen Jones with a foreword by Neil Gaiman


Welcome To The Movie Making Magic Behind Coraline

A book detailing all the behind the scenes info and gossip behind the making of the movie Coraline.

Stephen Jones has written a companion book here to the beautiful Henry Selick movie ‘Coraline’, which was in turn based on the novel by the very under rated novelist Neil Gaiman. The movie itself was a dark fable in much the same vein as a Tim Burton movie. That’s where it’s strengths lie so to read how it was made and some of the back story behind it was very interesting to me.

However I was a little disappointed with the end result. On the plus side we have some amazing stills from the movie, some great prototype pictures of how the characters evolved in to the ones that were finally used and some absolutely amazing behind the scenes photographs as well. There are also some great comments from the people involved as well that really show the love for the movie they made.

That’s partly where some of the problem lies however. When it’s quotes from the people involved, it really brings forward their enthusiasm for making the movie. Yet when it’s just the writer himself, it comes across as a little monotone. Maybe that’s due to the big personalities of the other people involved but it just makes it feel a little disjointed in places.

That’s not a reason to pass this book by however. If you did, you would be really missing out on some absolutely stunning art work and for me, that’s the main thing that sold me on this book.

All in all, I’d recommend it to fans of the style of movies that involve people such as Tim Burton, Henry Selick and Neil Gaiman due to their brilliant minds to create stunning beauty out of pretty much anything their twisted minds can come up with.

Posted by Pat Scattergood at 15:42