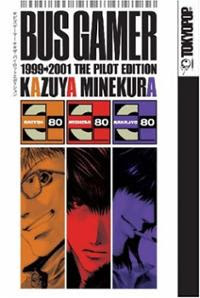 Toki Mishiba, Nobuto Nakajyo, and Kazuo Saitoh are hired to play the Biz Game, a game much like capture the flag, only with company secrets and insane amounts of money involved.

At first they think it's a crazy but fun way to get some money, but as the game goes on, they hear stories about mysterious deaths on the news, and recognize the victims as members of the teams they've beaten in the game.

When one of the losers of a game dies right in front of them, they realize what is really at stake--their very lives!

'Bus Gamer 1999-2001: The Pilot Edition' collects all of the issues of 'Bus Gamer' that have been published thus far but alas, the collection ends on a cliffhanger due to the series being on hiatus at the moment.  In a nice touch however, Minekura has written a note to say that she will get back to the characters one day but doesn't know when.

'Bus Gamer' revolves around a game that  is very much the game 'Capture the Flag' but with a mini disk that contains major company secrets.  Each game consists of two teams, one home and one away.  One has the disc and one has to get to disc within a time limit.

Each team is put together at random and that's no more obvious than with the team AAA, whose adventure we follow in this collection.  Each of the three are there for secretive reasons but sadly we only get to see glimpses of those as this series was put on hiatus, although what we do get to find out really whets the appetite and makes the characters really mysterious and interesting.

About halfway in the team members start to realise that not everything is the way it seems and that's  when things get really interesting.  I won't say anymore about the plot here as I don't want to spoil it for anyone but the writing is intelligent and fast paced.

The pacing of the story really doesn't let up through the whole of the collection yet Minekura still finds time to make the characters have their own distinct personalities and motives.  While the series did go on hiatus before she had time to uncover the motives for each member of Team AAA, she manages to make each of the characters very interesting.

Nobuto Nakajyo has a kind of snarky big brother relationship going on with the naive Kazuo Saitoh and that's where a lot of the humor comes from.  He really does spend a lot of the collection just ripping in to him and making jokes at his expense.

Kazuo Saitoh is the best character here and the most down to Earth.  In fact, when they have guns pulled on them during one of the games he is the only one that's phased by it and it really affects him for the rest of the collection.  The best way to describe him would be that he seems to be the most innocent of the team because the other two seem to have quite shadowy or mysterious pasts.

Toki Mishiba is the stone faced bad ass of the team and the one with the most mystery to him, which sadly doesn't get time to be revealed but what we do find out is very well written and really hooks the reader in.

The art here is superb and definitely up there with some of Minekura's best.  I may in the minority here but I prefer the artwork here to the work she does in the 'Saiyuki' releases.  The stark nature of some of the panels really adds to the fear and the feeling of dread that runs through the team.

While it is a shame that the series is on hiatus and thus ends in a cliffhanger, the issues we have here are very well written and fast paced, which along with the parts of the mystery that are revealed, make  for a very good release.  I just wish Minekura would come back to the title and give us some more issues.