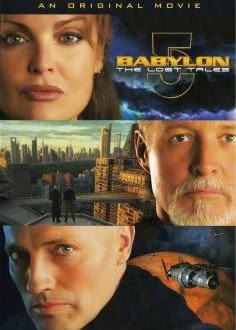 
Ten years after he became the President of the Interstellar Alliance, John Sheridan has returned to Babylon 5 to face new challenges and new enemies.

Babylon 5 Creator J. Michael Straczynnski reunites the series stars Bruce Boxleitner, Tracy Scoggins and many more in The Lost Tales.  Two tales set after the effects in the television series.

In one, a supernatural force has invaded Babylon 5 on a mission that will either redeem or destroy whole planets.

In the second tale, Sheridan faces the worst dilemma of his life.  To take or save one life, a decision that will result in either the salvation or destruction of the very Earth itself.

Babylon 5 was a bit of a marmite style show. You either loved it or hated it. I was always one of the former. While I did prefer shows such as Star Trek and Battlestar Galactica, I still really liked the show itself.

However after the disappointment of the spin-off series Crusade, I went in to this pair of spin-off stories with trepidation.

The worries were unfounded to be honest. As standalone episodes, they are very good yet have enough links to the show for the more rabid fans amongst us.

The first story about an exorcism, while sounding hokey on paper, is very well executed. The feel of the episode has a real claustrophobic feel to it and that really ramps up the tension. The performances are up to the standard set in the television show.

The second story however is a good, slow burner of an episode yet it falls a little bit flat. I feel that as this one was about a major dilemma facing Sheridan, the magnitude of the problem facing him could have really done with more time. As it is, even though the loose ends are tied up, it just leaves the viewer with a little bit of a "oh is that it?" feeling when it ends.

The transfer for these tales is very well done. In fact, the transfer seems a clearer and more defined in both sound and picture quality than the spin off series, Crusade.

One of the parts this release shines in are the extras. For a television release, these extras are very good and very interesting. The tributes to Andreas Katsulas and Richard Biggs, who are sadly no longer with us, are beautifully done. Subtle and touching.

All in all, if you're not a fan of Babylon 5 then chances are you won't bother giving this release a chance. That would be a shame because it's a good quality Sci-Fi release. Highly recommended.

Posted by Pat Scattergood at 03:06