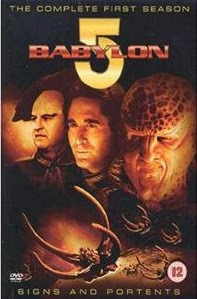 After the end of a brutal war with the much more powerful Minbari, who mysteriously surrendered, the Human race help to run Babylon 5.  A space station that welcomes many different alien species, while trying to keep the fragile peace together.

However, there are forces behind anyone's control that wants nothing but destruction to rule supreme.

'Babylon 5' is hailed as one of the greatest science fiction shows that has ever been produced in many circles of fandom.  While I wouldn't go that far I would still say that it was and is a very well made and intelligently written drama.

Season 1 obviously finds us right at the beginning of the adventure.  There is a lot of filling in and back story stuff to get through and as such, this season  can sometimes fill like it's listing off a who's who of the 'Babylon 5' universe but that's not to say that this is a boring season.  Far from it.

This season introduces us to some soon to be very familiar faces.  G'Kar, Sheridan, Garibaldi, they're all here and more.  The best of these is by far the alien known as G'Kar.  All through the season, you're never quite sure whose side he is on and that's one of the endearing things about the characters here.  Another great addition is a recurring character named Alfred Bester, played with glorious menace by Star Trek veteran, Walter Koenig.  While he only appears in 12 epsiodes during the five season run, his character is one of those that just stays with you long after the end credits have rolled.

The writing here has a grand scope and really sets the base for what will soon become a fast paced and gripping series.  Straczynski sometimes has a bit of a habit of over explaining in a few scenes here and  there but it's not too distracting.  However, it's the characters that really set the series apart from the other science fiction television shows of the time.

During the series, the special effects have aged a bit here and there but considering this was the first of the science fiction shows to use entirely computer generated special effects, they have held up pretty well.  I would even say that they've given the series itself a bit of retro charm.

The special features aren't exactly numerous but what's here is still pretty good.  However, I would say that the special features suffer from the same problems as the series itself.  While all the pieces are there, it doesn't quite gel completely.

All in all, this is a good starting point for the 'Babylon 5' television series and a sneak peek of just what is to come.  It's a show that is definitely worth sticking with as it gets better with each passing season.

Posted by Pat Scattergood at 13:33