An Interview With Rachael Smith, Creator of Flimsy and Writer / Illustrator of The Way We Write 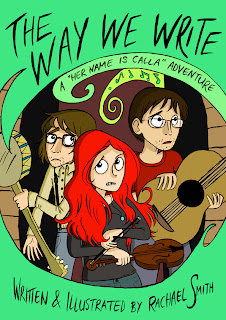 Today Curiosity of a Social Misfit welcome the talented artist Rachael Smith in to our midst for a chat about her new comic book 'The Way We Write' and her art.

PC: What made you want to become an artist?

RS: Well, growing up it was pretty much all I ever wanted to do. I’ve been drawing all the time since I was old enough to hold a pencil. All my folks even had to give me to keep me quiet was a ream of a4 paper and some felt tips. Then I did art at college and uni and loved it. There was a couple of years where I attempted to get a ‘grown-up’ job. I worked in a couple galleries in London, but in London you never really have much time to do any ‘hobbies’ when you’re working full time. I realised I was pretty miserable not making any drawings, so I stopped, came back to Leicester and started again. Now I still have an office ‘day job’, but hopefully in the next couple of years I’ll be able to stop and just do illustration stuff. I still make sure that I draw every single day.


PC: Do you have any strange quirks or traditions while you're working?

RS: Hm, I go through phases of needing complete silence or needing to have the telly on. I think I adapted to working through various noises as I’ve always shared houses with other people. I quite like having ‘Come Dine With Me’ on in the background! I often have to work with my cat on my knee as well.

PC: You have quite a distinctive art style but how would you describe your work to someone who may not be familiar with it?

RS: In the comics world I get compared to John Allison and Marc Ellerby quite a lot. I suppose to someone not familiar with those guys my work could be described as very colourful and silly. Richard Bruton, of Forbidden Planet International describes my style as: ‘absolutely completely fun, wonderfully vibrant, full of joy, funny, and fresh’.


PC: You're best known for your feline creation Flimsy.  What inspired you in to creating such a popular character?

RS: Aw good old Flimsy! She’s been with me for a long time; I first started drawing her in 2004, when I was at uni. I pretty much started drawing Flimsy when I was in boring art history lectures, then a couple of fellow students saw her and asked about her, they seemed to really like her. Back then I just called her ‘Scribble Cat’. I can’t really remember when she became ‘Flimsy’, but I do remember making her blue for a video I made of her (http://vimeo.com/2601359) I think I made her blue because she’s always slightly downtrodden, and I knew she was different and shouldn’t be the colour of a ‘normal’ cat. These days Flimsy is still going, she has her own question and answer tumblr here: http://askflimsy.tumblr.com/, where Flimsy answers questions from fans.


PC: As well as Flimsy, you have created a diary set out like a comic book.  What made you decide on such a project?

RS: A few years ago I was diagnosed with depression; it’s something I’ve struggled with for a long old time. At about the same time as the diagnosis I discovered ‘Emitown’ which is a really beautiful diary comic by illustrator Emi Lenox. I thought I could do something similar, but with a positive spin. So I started ‘One Good Thing’ (http://rachaelsonegoodthing.blogspot.co.uk/) which was based on me finding something good in each day and drawing it. I thought it would help me to think more positively and look for nice things rather than picking out the negative ones. It’s working OK so far! The nicest thing is though, because I’m so honest about my illness on the blog, I get the occasional email or message from readers that suffer from similar feelings that thank me for putting my stuff out there and making them feel less alone. Whenever I feel scared about posting something because it’s a bit personal, I think of all the people I could be helping and that helps me click ‘publish’.

PC: You've recently illustrated a comic called 'The Way We Write' featuring members of the band 'Her Name is Calla'.  How did that collaboration come about?

RS: Well, I’m good friends with the band and happen to be dating one of the members, Adam. One day Adam told me that him, Sophie and Tom were going on a writers retreat to Whitby. I did a little bit of reading about the place and it sounded really interesting. Especially all the tales of it being haunted! That sort of planted a seed and I came up with the story for ‘The Way We Write’. After getting the band’s permission to go ahead (they were all pretty excited about it) I started drawing it. It was fun having people to bounce ideas off and to show each page to as I finished them.


PC: After the great critical response to 'The Way We Write', what other projects do your fans have to look forward to?

RS: Oh gosh, yeah, ‘The Way We Write’ got SUCH a good response from critics; I was so touched and humbled. So for my ‘difficult second comic’ I’m very nervous! I’ve worked quite hard on writing my next one though. It’s called ‘I Am Fire’, and is about made-up characters rather than characters based on real life people. The other comics project I’ve got to work on at the moment is ‘Cooking with Annie and Oxford’, which will be a series of recipe books in comic form. The Forbidden Planet International blog did a nice preview of them here: http://forbiddenplanet.co.uk/blog/2013/comics-more-rachael-smith/

PC: You have an exhibition coming up soon with a team of other artists.  What can you tell us about your art that has been entered in to that?

RS: The four pieces I’ve submitted for that exhibition are all based around bad choices that young women make. I find it difficult to talk about them as I didn’t really think much when I was drawing them, they just sort of…came out. I quite like that though as it makes them kind of more ‘ghostly’?


PC: So what's next for Rachael Smith?

RS: Well, hopefully releasing ‘I Am Fire’ and the first ‘Cooking with Annie and Oxford’ comics over the next few months. I’m working on putting together a ‘Best of Ask Flimsy’ book for the last years’ worth of questions too. I’m doing a couple of comic conventions this year too, I’m at London Expo from the 24th-26th May, and Thought Bubble from the 23rd- 24th November.

PC: Thank you very much for joining us here today, it's been a pleasure.
RS: You’re welcome.

For more information about this talented artist, please check out these links.

Posted by Pat Scattergood at 14:32