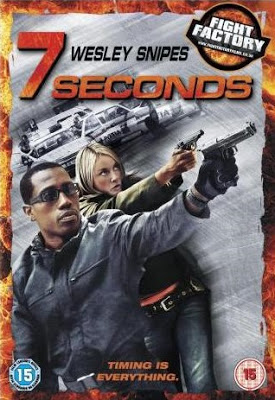 Captain Jack Tolliver (Snipes) is an ex-Delta Force commando leading what should have been a clockwork-perfect armored car heist. Instead, he ends up with a priceless Van Gogh painting - and one of his crew ends up held hostage by the sadistic Russian gangsters who muscled in on the heist!

Tolliver's only option: a suicidal rescue mission where enemies become allies, your best friend can be your worst nightmare, and survival is the deadliest art of all..

I've always had a soft spot for action movies.  The more explosions and car chases the better.  I also really like watching Wesley Snipes movies.  In theory the combination of all four of those things should be great right?

That's definitely not what we ended up getting.  Instead we have got a movie that has some of the worst editing I have ever seen in a movie.  Car chases where the more things the car hits the less damages appears on the car itself.  Tamzin Outhwaite, who makes Kristen Stewart and Tara Reid look like Oscar winners and half baked fight scenes that manage to be boring.

Wesley Snipes gives it his best shot as the wise cracking, ass kicking Tolliver and gives him a real world weary, cynical air to him.  In fact, Snipes is the only good thing about this movie.  The rest of the cast range from being bad to being absolutely awful.  The worst of these is by far Tamzin Outhwaite, who is famous for being in the English soap opera 'Eastenders', but somehow manages to be massively wooden.  All she has to do is look tough and put some effort in to her, mostly cliched, lines but she says them with such a dead pan fan and monotone delivery that you just switch off the minute she appears on the screen.

Like I mentioned earlier, the car chase scenes show just how bad the editing job is on this movie.  It really does seem that the more things the car hits, the less damage appears.  It's almost as if the car fixes itself as bonus points for hitting things.  It's like a computer game but less fun.

Another thing that really annoyed me was the recording of the dialogue.  At times it would be incredibly loud and others it would be so quiet that you would really have to crank up the volume just to hear what they are saying.

If you want to watch a good action movie starring Wesley Snipes then try the movies 'Money Train', 'Passenger 57' or even the 'Blade' trilogy but seriously, give this pile of dross a miss.  I will never get the time I wasted watching this back so don't make the same mistake.