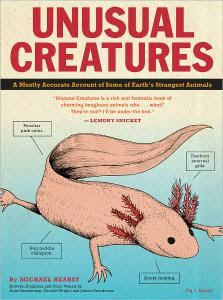 With humour and flair, Michael Hearst introduces the reader to a wealth of extraordinary life forms in this nonfiction book.

These fascinating facts and hundreds more await intrepid readers, amateur zoologists and anyone who has ever laughed at a funny-looking animal.

"Unusual Creatures is a rich and fantastic book of charming, imaginary animals who...what?  They're real?  I'll be under the bed." - Lemony Snicket

With a quote like that on the cover, the reader pretty much knows what to expect when they open this book.

What we have here is a massively entertaining yet educational book on some of the weirdest and strangest animals that can be found on this planet of ours.

Michael Hearst has done something that my school science teacher couldn't do.  Held my entire attention with this science book about animals.  Now as I've gotten older I've discovered a love for science and that is thanks to well written books like this.  While it's true that it's mostly aimed at young teenagers, although littler ones will love looking at the superbly drawn pictures here, there's plently to help us adults entertained too.  His humour really shines through in the writing, especially the descriptive parts.  There are loads of brilliantly written passages that will absolutely grip the kids as well due to the fantastic imagery that they conjure up.

That's not the only good part of this book either.  The drawings, like I've said before, are absolutely fantastic.  They make the animals really look like something out of a comic book yet are scientifically correct as well.  My three and a half year old positively loved looking at them and asking what each animal was.  Team that up with the hilarious writing and you have a book that not only gripped my sons imagination but also mine.

The diagrams as well as superb.  Pointing out which things make each animal unique without coming over as too complicated so my hats completely off to the artists here.

All in all, this is a fantastic book and one that I will love showing my son for a long time to come.  Highly recommended.

Posted by Pat Scattergood at 08:08