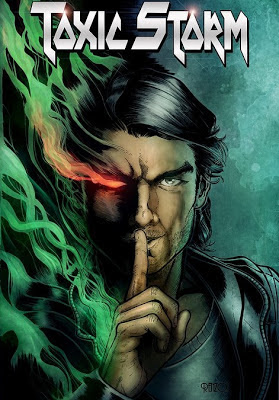 After being unfairly convicted and executed, Simon Fisher is reanimated as a deadly toxic gas and sets about gaining revenge against everyone who wronged him.

Soon, he turns himself in to the FBI and slowly but surely tells them his story but what's next for Simon Fisher?

I have to admit one thing comic book fans.  I stumbled on this title by accident while surfing through the myriad of comic book writers and artists on Twitter.  The write up sounded most definitely up my street and here we are today.

The story itself may be a simple one in terms of one of the main cores being about the need for vengeance that fuels Simon Fisher but that's not the only thing going on.  In fact there are lots of subtle little nods to things that will happen in the future and things that have already happened.  That's a great touch in that it really hooks the reader in and makes them eager to get to the next issue without battering them over the head with too much information too quickly.

Another thing that I really liked was the way they used the flashbacks.  They told us just enough about Fisher to know some of his motives but have left some things not fully explained.  I really liked that because it leaves an air of mystery to an already interesting character.  The ending is great in that you really leave it with a sense of forboding and a sense of wanting to know what the next step Fisher will take will be.

The art is fantastic.  It comes across as a mix between 80's video nasties and 'Silence of the Lambs' style pyschological thriller.  Rodriguez is a supremely talented artist and along with the colorist Mike Summers, they have combined to create a look that manages to juggle the modern with an 80's sensibility.  I would be remiss if I didn't mention the fantastic lettering work by Mindy Lopkin.  They really explode off of the page and really draw the reader to the action.

All in all, I honestly can't wait to get to issue two.  This is a superb debut for what I hope will be a brilliantly successful comic series by some very talented people.

Posted by Pat Scattergood at 13:27