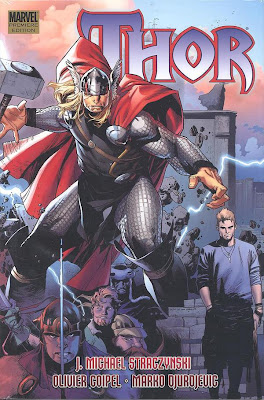 
In the wake of Ragnarok, and after awakening from the sleep of the Gods, Thor has set about restoring Asgard to it's former, making it more majestic and more magnificent than before.

He has revived countless fellow Norse gods from the brave Balder to the voluminous Volstagg to the treacherous Loki.

But what of the mighty Odin, the All-Father?  Where is the lion of Norse legend, the son of Bor, the one who took a godhood of rambunctious rabble-rousers and made them a pantheon without peer?  Why is he yet to be awakened?

The secret is known only by the God of Thunder - a secret buried deep inside a soul filled with the kind of fear and humiliation only a son can feel in the immense shadow of his father.

Though, as Loki's master plan will soon attest, Thor is not the only one with a secret to share.

Volume One of this series was a massive triumph. In fact, Stracznyski crafted as near to perfect a return for Thor. It was exciting, had twists and turns to keep even a brand new reader gripped without feeling lost. Thor's quest to restore Asgard to it's former glory all while trying to restore the other Gods to their former powers. Not once did it feel cliched or too far fetched for a Thor story. I also like the way they didn't have a cop out ending either. Sometimes if a character has been killed or disappeared, they also do a long or over the top storyline to explain the reappearance. That wasn't done and it created a great kicking off point to volume 2.

This volume, while not as good as the first, is still an absolutely fantastic addition to the new Thor history being crafted. The writing is spot on and leads slowly but surely to an absolutely shocking conclusion. That's even after some massive revelations about some of the characters that I didn't see coming at all. Straczynski has yet again crafted a brilliant story adding more to the Thor / Odin relationship while really playing up the character of Loki ad making him seem strong without making him one dimensional.

The artwork is handled by both Olivier Coipel (who did an amazing job on volume one) and Marko Djurdjevic and the two styles mesh very well. The battle scenes, especially the shocking end battle, really fly off of the page and make the reader eager to turn the page to see the next panels.

I firmly believe that the team of Coipel and Straczynski is one of the best team ups in recent comic history at the moment and I for one can't wait for volume three.

Posted by Pat Scattergood at 14:55