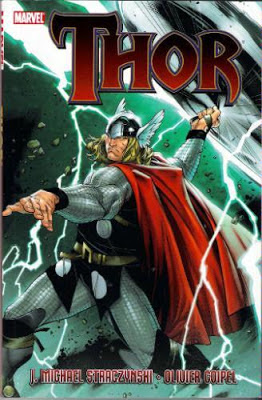 
Not a clone! Not a robot! Not an imaginary story! The God of Thunder is officially BACK!

You've waited for it, you've demanded it... and we say thee YEA! But how does a god return from Ragnarok? And what place will he find in a world torn by Civil War?

J. Michael Straczynski is well known in comic circles. Not only did he resurrect Spider-Man and bring him bang up to form (which sadly is overshadowed by the controversial end of his run), he also created his own comic book collection called Rising Stars. In much the same way as Kevin Smith, he has a fantastic skill for creating new worlds, new characters and for making existing characters seem brand new.

That's exactly what he has done here with The Mighty Thor. Along with some absolutely amazing artwork by the superb Olivier Coipel, the story is both exciting and incredibly emotional at the same time. For me, a fan of Thor, I'd found that he was becoming quite one dimensional.

Here Straczynski, has really looked to the past for inspiration as well as a) bringing him up to date and b) created so many new layers for the character that there is a very bright future with so many ways to expand as well.

This story works as part of a larger story as well as a standalone story too, albeit with a really a heart breaking ending too. The way they tied his disappearance with the disaster in New Orleans and his guilt over not being there to help was handled very well.

His quest to find the other Asgardians, while the main core of this release, doesn't over shadow the other stories that all tie together. In fact, with no intended hyperbole, is one of the best Thor stories I have read.

I honestly can't recommend this higher. Even if you're not a fan of Thor, you will still love this well written, exciting and intelligent tale.

Posted by Pat Scattergood at 14:30