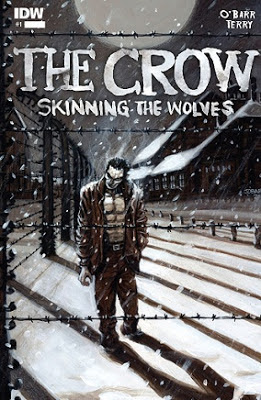 
James O'Barr returns to The Crow!

In this special three-part tale, O'Barr and artist Jim Terry craft a harrowing tale set at a death camp in 1940s Germany, where a simple game of chess turns deadly, leading to the creation of a new Crow, giving new meaning to the term Gotterdammerung ('Death of the Gods')!

'The Crow: Skinning The Wolves' is a bit of a strange comic book in that both a lot happens but nothing happens at the same time.

There is action galore in this first issue of a three issue run yet not a whole lot is said either.  The things that are said don't really make a whole lot of sense but I  suppose all will become clear in the later issues.

'Skinning The Wolves' is set during World War 2 in a Nazi concentration camp, which is a brave both by O'Barr and Terry.  Concentration Camp / World War 2 stories either come across as cliched or as absolutely brilliant and absorbing.  There doesn't seem to be a middle ground.  As of yet I don't know where this one stands.

The Nazi's don't know who this strange and invincible man is and by the end of the issue neither do we.  He appears to have a history with one of the commanders but at the same time, the air of mystery is something that is a strength of the comic while also being a bit of a minus as well.

That said however, I absolutely loved the stark and sometimes simpler artwork in this issue.  I wasn't all that familar with Jim Terry's artwork before but I am impressed with what I have seen here.  I'm definitely looking forward to seeing where he is going to take the story art wise next.

All in all, I'm looking forward to see what is going to happen in issue two.  I want to find out just why this guy has been brought back, what the history between him and the commander is and so many other questions.  James O'Barr is definitely an under rated comic book writer and here, the story is quite up in the air, hence the score.

Worth picking up if you're a 'Crow' fan so try it out.  The story itself is a little frustrating due to the scattergun style opening but at the same, I want to find out what will happen next so give it a shot.