My Own Worst Enemy: The Complete Series DVD Review 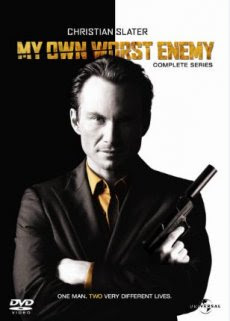 Henry is a middle-class efficiency expert living a humdrum life in the suburbs with his wife, kids, dog, and a minivan. Edward is an operative who speaks 13 languages, runs a four-minute mile, and is trained to kill. The one thing Henry and Edward have in common is they share the same body. But when the carefully constructed wall between them breaks down, these polar opposites are thrust into unfamiliar territory where each man is dangerously out of his element. Also starring Alfre Woodard, Mike O'Malley, Mädchen Amick and Taylor Lautner, plus powerful guest stars such as James Cromwell.

Christian Slater hits his best form for a long time in this intelligent thriller.

Slater plays two parts here and both are completely separate and as if played by completely different people. One is Henry, an office worker with the perfect family. The other is Edward, a bad ass assassin for the Janus Corporation. A shadow like group who have implanted a chip in his head that allows him to switch between the new personalities. Suddenly the chip malfunctions and the personalities now switch at random, even in the middle of Edward's missions.

I don't know why but this series didn't get past the first season. That's a real shame because it's one of the most intelligent television shows I've seen in a long time. Christian Slater's performance is one of the best of his career and there are some absolutely brilliant performances next to his such as James Cromwell and Alfre Woodward.


Annoyingly because of the abrupt end of the series, the cliffhanger ending means that a lot of the  story line remains unresolved and there are many loose ends.  That's a real shame because the quality was growing as the series progressed and you really started to get deeper and deeper in to the conspiracy behind why these things were happening.

While there is a distinct lack of extras, it doesn't really matter because the quality of the show is so high that that's soon forgotten.

Highly recommended.  For this review I'd honestly didn't the lower score.  That's just because of there being no special features.  The show itself is absolutely superb and well worth picking up.

Posted by Pat Scattergood at 05:39