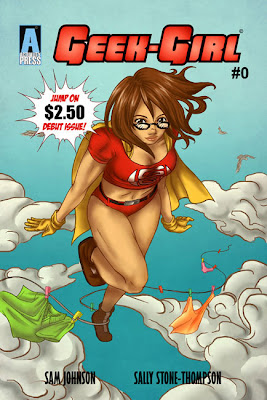 When Ruby Kaye lands a pair of hi-tech glasses invented by a brainiac student in a game of strip poker, she's granted flight, super-strength, and - due to a flaw in the specs' programming - super-klutziness!

With a rather comical premise to the story itself, this series could go one of two ways.  It's either going to be a full on laugh-fest or be a bit like 'Kick-Ass' in that there's a superhero who isn't perfect but always finds time for something funny to say or do.

What we have here pretty whets the appetite for what will be coming but, and I'm being completely honest here, I still don't really know what to expect from the other issues.

That's not to say that it's a bad comic book at all because it isn't.  The writing flows nicely and is quite funny yet realistic in places.  Instead of going for the stereotypical group of jocks, bitches and cheerleaders, the group of them really do come across as a group of friends who rib each other and sometimes fall out over little things.

While the writing developing the characters is good that's also one of the flaws in that while the character is well written, there's not enough space given to the actual act of being the Geek-Girl of the title.  That's kind of a minor complaint because everyone has to have an origin story right?  I did like the ending where you are left with a sense of forboding after the first good deed of the fledgling superheroes career.

The art itself isn't superb but at the same time isn't bad either.  The characters are all fairly well drawn and thought out, the art giving each one a distinct personality yet it's the background that is sometimes found lacking.  There are a couple of scenes where the action / dialogue appears to be happening in what I can only describe as limbo as there doesn't seem to be anything background wise.  While colour may have minimised this, you have to remember that this is a black and white comic so a little more detailing on a couple of scenes would have really raised the rating.

All in all, those are relatively minor complaints in the overall scheme of things.  While I wouldn't go so far as to say this title is essential I would say that there is a fair bit of protential in this story so I'm going to sit back and wait to see where the next issue takes me.

Geek-Girl #0, written by Sam Johnson, illustrated by Sally Stone-Thompson and published by Actuality Press is available now in $2.50 Regular and Variant Editions and $1.00 Digital/Kindle Editions at www.geekgirlcomics.com
Posted by Pat Scattergood at 13:12