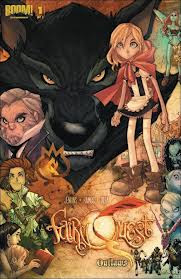 The world of Fablewood, where all of the stories that have ever been told live side-by- side, is a sinister place indeed! Under the watchful eye of the dreaded Mister Grimm and his Think Police, Red Riding Hood and her Wolf must risk everything to try and escape and find sanctuary in a mysterious place called the Real World… Written by industry legend Paul Jenkins (SENTRY, DEATHMATCH) and drawn by comics superstar Humberto Ramos (AMAZING SPIDER-MAN), the smash Kickstarter, FAIRY QUEST, is now available in single issue format for the first time!

'Fairy Quest' started life as a 'Kickstarter' campaign and is now released here as a comic book but was it worth the wait?

Hell yes it was!

The story itself is set in the world of the fairytales that we all know and love from our childhoods.  Little Red Riding Hood, The Woman in the Shoe, they're all here but they're not how you remember them.  Far from it.

The characters are trapped in an endless cycle of repeating the same stories over and over with no deviation otherwise the dreaded Mister Grimm and his task forced named the Think Police will arrest them and wipe their memories.

Suddenly Little Red Riding Hood gets sick and tired of repeating the same story verbatim each day of her life and that's when she befriends the big bad wolf of the story.  That's when all Hell quite literally breaks loose.

This title is definitely in same vein as Terry Pratchett and if you are a fan of his then you will most definitely love this release.  The story itself is well paced, the characters well written and the twists are sharp and well thought out.  I couldn't stop turning the page in fact.  I just couldn't wait to see what was going to happen next.

The artwork is another major strong point to the release.  The drawings of the characters are so well realised and the sheer amount of details on each of the characters is immense.  One of the main strengths of Humberto Ramos' work here are the action scenes.  They're frantic without being confusing and that is a pleasant surprise.  Even during the most packed action scenes, the characters still absolutely fly off of the page.

If you are a fan of Terry Pratchett or of movies such as 'Big Fish' then you will most definitely love this one.  I know I did!  Bring on issue 2!