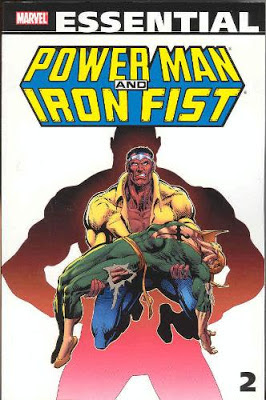 Organized crime, interdimensional evil, espionage, vampirism - the Elite Odd Couple of the Eighties can handle it all!

The origins of Power Man and Iron Fist are retold as figures from each past return to haunt both!

One of the best things that Marvel have done in recent years is, by far, the 'Essential' collections that collect some of the earliest adventures of the now well known superheroes that fill their already massive roster.  We've have Spider-Man, Ghost Rider and many more get the treatment.  Now here we have got the second volume of the 'Essential Power Man and Iron Fist'.

Now I know that these guys aren't the most famous guys on the roster but let's not count them out yet.  There are some really good adventures contained in these pages.  I'll admit that they're not my favourite team up in the Marvel Universe but I've seen much worse.

That said however, this is a bit of a mixed bag here.  There are a couple of really bad stories here that kind of weigh down the whole collection.  At the same time however, there are some really good stories and we have some absolutely brilliant guest stars as well  ranging from Daredevil to Elektra and even Sabretooth.

As well as those we have guest spots by some of the lesser known characters of the era as well such as el Aguila, the Daughters of the Dragon and many more.

The tone of the stories are very 80's, not a surprise seeing as that is the era that they were written in, but there are plenty of twists and turns to keep the newer fans occupied too.  Also the stories are written and drawn by some of the best that the comic book world has to offer such as Frank Miller, Chris Claremont and even a young inker by the name of Mike Mignola.  Maybe you've heard of him.

All in all, this is a pretty good collection and while it is a bit hit and miss, you can pick this one up relatively cheaply so it's well worth a look.

Posted by Pat Scattergood at 08:32