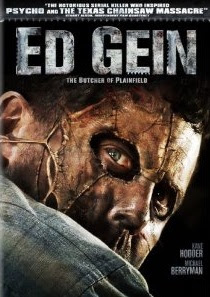 
Inspired by the true story of one of the most gruesome killers in American history. Now, years after inspiring "Psycho's" Norman Bates, "The Silence Of The Lambs'" Buffalo Bill and "The Texas Chainsaw Massacre's" Leatherface, the story of real life serial killer Ed Gein is told once again.

Nicknamed "The Butcher Of Plainfield," Gein was responsible for a rash of gory murders that sent shock waves through his rural Wisconsin town, and across America, in the late 1950's.

Prepare to enter the evil mind and twisted world of "The Butcher Of Plainfield."

I've always been really interested in the bizarre story of 'The Butcher of Plainfield' Ed Gein and the various ways he has been portrayed in movies and books along with how his story has inspired the characters in other movies.  Some of those movies such as 'Silence of the Lambs' and 'Pyscho' have been and will always be regarded as absolute classics.  This one, not so much.

Firstly, the acting is uniformly bad in a 'did they just walk on to the and start joining in' type of bad.  There is one saving grace however and that is Kane Hodder, who gives a wonderfully menacing, if inaccurate, portrayal of Gein himself.

Secondly the writing is positively all over the place.  Sub plots start and  then never come to a conclusion, characters appear, disappear and reappear with no explanation and don't even get me started on the rampant historical inaccuracies in this movie.  They're 'U571' level of inaccurate.

One of the things that really bugged me however was this bore next to nothing to the real story itself.  Firstly Kane Hodder, who like I said earlier does a good job with what he has, is totally wrong for the role itself.  The reason Gein got away with so much was the fact that he was unassuming and ultimately forgettable.  The big hulking presence of Kane Hodder is anything but unassuming.

Secondly, what was the point of the Jack character played by Michael Berryman, who viewers will remember from 'The Hills Have Eyes' and 'Star Trek: The Original Series'.  Gein had no help with his crimes so a) this character isn't true to life in the slightest and b) is a largely pointless character in the movie itself.

The special features aren't much better either.  I get the feeling that the cast and crew think they made a better movie than they actually did.  Poor deluded little souls.

All in all, if you want to see a good movie based on the legend of Ed Gein that actually bothers to get the facts even remotely correct then give this one a wide birth.

However if you want a horror where the acting is so bad that you can't wait for the cookie cutter style characters to be killed off then grab this one if you can.  It's a shame Kane Hodder got stuck with this movie considering he's actually a pretty good actor.

Personally, if I want to see Kane Hodder killing people then I think I'll stick to the 'Friday The 13th' movies that he made.