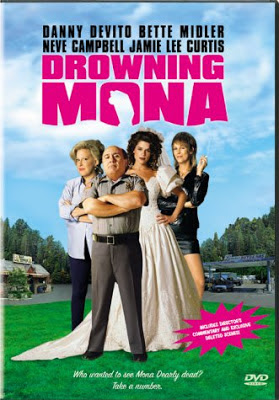 During the opening credits, the despicable Mona Dearly (Bette Midler) is seen driving her Yugo into the Hudson River. This sets off an investigation headed up by Chief Rash (Danny DeVito), who quickly determines that Mona was murdered. Now his problem is that everyone who knew the woman is a possible suspect. Her self-described battered husband, Phil (William Fichtner), her unnaturally dumb son, Jeff (Marcus Thomas), and her son's much-abused, good-natured landscaping partner, Bobby Calzone (Casey Affleck) all have motives. Complicating matters, Phil and Jeff were both having an affair with the same waitress (Jamie Lee Curtis) and Bobby is engaged to Chief Rash's lovely daughter, Ellen (Neve Campbell).

When this was released, it got an absolute drubbing from the critics and, rather unfairly, disappeared quite quickly.

However is this really that bad a movie?  No, not at all.

While it's not perfect in any stretch of an imagination, it's still a darkly comic and entertaining movie with some good to great performances.

The cast here gives us some really good performances, especially those by Danny DeVito and Bette Midler.  They both completely own this movie and make it their own, especially Midler who can play mean like nobody else.

However, that crown is very nearly stolen away by the criminally under rated William Fichtner, who plays Mona's long suffering husband.

The only weak link of the cast is that of Neve Campbell.  I've never been that big a fan of her performances yet here she just seems instantly forgettable in her role as the sheriff's daughter.  Casey Affleck as her fiance does a really great job of portraying someone so beaten down by life that no matter how hard he tries, he just can't catch a break.

I've read in some other reviews and reports about this movie that Affleck has pretty much disowned this movie and his performance in that and that's a real shame because he does give a wonderfully subtle performance.

The writing is quite off the wall and dark.  In some places, that works superbly well yet in others it does tend to fall flat on it's face.  However, there are many little quirks in this movie that I really did like.

For example, thanks to a long standing promotion with a car maker, everyone in this small town all drive a Yugo car with personalised license plates.  The devil is in the details as they say.

The special features are a little disappointing but at the same time, I was surprised that there were any at all so I suppose I can't be too harsh on them.  The behind the scenes stuff and the interviews just don't really seem to go anywhere.  However the deleted scenes and the commentary do raise the score a bit.

All in all, this isn't as bad as all the reviews make out.  It's not as good as the other movie DeVito and Midler teamed up in named 'Ruthless People' but this is still an entertaining dark comedy with some pretty good performances, except for Neve Campbell.

Definitely worth a look, especially for the wonderfully creepy performance by Will Ferrell as the towns undertaker.

Posted by Pat Scattergood at 11:14