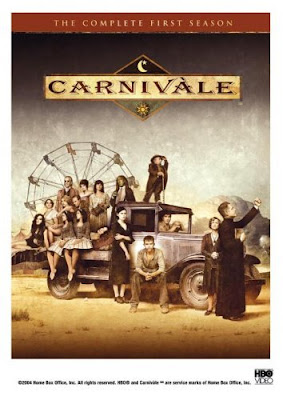 Set in the 1930s Dust Bowl, 18-year old Ben Hawkins finds himself all alone in this world when his mother passes on. But a travelling Carnivale takes him in.

We also see the story of Brother Justin, a priest who is trying to find his way in the world. Little do Ben and Justin know, but they are to fight in a biblical battle.

With help on the side (Ben with the carnie folk (Sofie, Libby, Apollonia, Ruthie, Samson, Lila, Lodz, Management) and Justin with his sister, Iris) they find out which side each are on and try to battle with the other for what they believe.


Running from 2004 to 2006, Carnivale ran for two seasons on the HBO station in America.  Set during the Great Depression / Dust Bowl time periods, it had a very Western yet gothic theme to it.

Taking many pointers from various sources such as the Bible, the legend of the Templars, Masonic legends and lots of other places.  This really gave the series a unique feel.  As did the fantastic filming style that can best be described as Tim Burton meets John Ford.

Another major plus was the innovative writing a lot of which was done by the criminally under rated Ronald D. Moore, who was also responsible for being back ‘Battlestar Galactica’.  Some of the twists and subtle hints towards the characters pasts are so well written that you can’t wait to see what happens next or wait to see how so many people are connected.  Two episodes, ‘Babylon’ and ‘Pick A Number’ really stand out in that aspect.

Also the season finale, while not exactly breaking new ground, really ramps up the excitement and leaves so many questions that you are literally aching to see who knows what and what will become of the characters.

A review of this would be void if I didn’t mention some of the absolutely fantastic performances.  Clancy Brown, famous for his roles in ‘Highlander’ and ‘The Green Mile’, gives an absolutely fantastic performance as Brother Justin and Nick Stahl, from ‘Terminator 3: Rise of the Machines’, gives a great performance as Ben Hawkins.  Two characters who are in separate places yet their lives are inexplicitly linked through their dreams.  Hawkins, a healer, somehow keeps dreaming of the overly religious zealot Brother Justin.  Is it somehow linked  to a battle between heaven and hell or do they have a dark and sordid past together?

I also loved the wonderfully creepy performance by John Hannah.  In the short time that he spent in the series, he really made an impression and I would have loved to have seen a little bit more of his character.

While not exactly numerous, the special features are very well picked and very interesting.  Especially the ‘Making of’, which really goes in to some great detail about the whole process and how the scenes were shot.

A series definitely worth picking up, especially as it’s available quite cheaply, for both fans of shows such as ‘Twin Peaks’ and of people that just want to watch a show that’s actually very intelligent.  While sometimes the viewer is left a little confused, that’s not a bad thing at all because it’s the good kind of confusion in that you want to watch the next episode to see what questions will  be answered and if there'll be any more twists and turns.

Posted by Pat Scattergood at 02:29