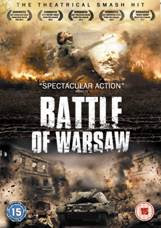 Poland's winning battle against Soviet Russia as seen through the eyes of two young protagonists, Ola and Jan. She is a Warsaw cabaret dancer, while he is a cavalry officer and poet who believes in socialist ideals.

As a massive military buff and a fan of war movies I was very eager to watch this movie as I didn't know all that much about Poland's battle for independence.  I'm very glad I got the chance to as I was very surprised at the sheer quality of the movie.

Originally filmed in 3D, Poland's first ever 3D movie in fact, this version was the 2D and to be honest, I'm glad it is because I honestly don't think the movie needs the 3D gimmick at all.

What we have here is a very well told story with some brilliant performances that really make you care about what happens to the main protagonists.  The main couple, played by Borys Szyc and Natasza Urbanska, really rule the entire movie.  When they're together, the romance really flies off the screen as the chemistry really sizzles.  When they're apart the individual stories really hold the attention the viewer and as they have spent the time building the characters, you really want them to be reunited.

The special effects here are amazing.  While the movie doesn't have the same sort of budget as movies such as 'We Were Soldiers' and the like, they use their budget really well.  The battle scenes are absolutely thrilling.  I honestly couldn't take my eyes off the action on the screen and when you see the wounded, you really can't help but flinch at the realistic make up effects on the soldiers.

Music also plays a very big part in this movie, both in the cabaret scenes with songs sung beautifully Natasza Urbanska and in what I would call the 'war' scenes.  The music really makes the movie have a strong heart at the middle of it and that's essential if you are going to make a good war movie.  It can't just be explosions and gunfire, you have to have good quality characters and that's what we have here.  You really get involved in the story and in the characters, which really raises the quality of the movie itself.

I've seen some quite bad reviews of this on IMDB and I really can't understand the criticisms levelled against the movie itself.  The cast is well chosen, the writing is intelligent and engaging and the action set pieces are very well done considering the budget of the movie.

I would definitely give this a look.  It's well made and well written so definitely one for the fans of war movies here.  Plus even if you don't know a lot about the battle for Polish independance, you could even learn something really interesting by watching this movie too so what more could you possibly want?

Posted by Pat Scattergood at 14:02