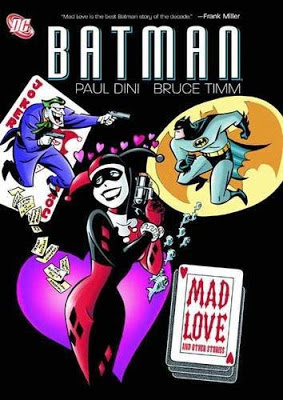 The award-winning adventures of pyschotic clowns and the women who love them.

Bruce Timm and Paul Dini were two of the masterminds behind the Emmy Award-winning 'Batman: The Animated Series'.

Now these incredible collaborations and more are collected here, as the duo of Dini and Timm dive deep in to the world of the Dark Knight with thrilling tales of dangerous dames, demons and deathtraps!

When the cover of a graphic novel has a quote from Frank Miller saying 'Mad Love is  the best Batman story of the decade' then you know that you are on to a winner.

For once, I actually agree with a such a lofty opinion of a comic book release.  In fact, Frank Miller's opinion that it is the best of the decade is completely spot on.  It really is one of the best releases of the 90's and as we all know the 90's were a very good decade for comics, especially for Batman.  So that is lofty praise  indeed.

The collection of stories here are very varied story wise but the same quality wise.  The best of these is obviously 'Mad Love' but the others more than keep up their end of the bargain.

Some of them are really short stories like the story '24 Hours' that is only a couple pages long and revolves around Harley Quinn being released from Arkham and what happens in those ensuing 24 hours.  They manage to get a lot crammed in to those couple of pages and a hell of a lot of humour in too.

One of the best in the collection is the film noire style story 'Two of a Kind' starring Harvey Dent / Two-Face and is a very well written, intelligent and heart breaking story of someone trying to better themselves.  It really is one of the best Two-Face stories that I have read out of all of the Batman releases.

Another one of the major strengths of this collection is the truly superb artwork.  While many different artists such as Bruce Timm, Matt Wagner, Rich Burchett, John Byrne and many others, not once does the collection feel disjointed art wise.  The art really does explode off the page and really wouldn't look out of place in the television series either.  That's not to say it looks cartoony because it doesn't.  It's bright and exciting yet at the same time manages to have a dark and sinister quality to it.

Essential.  Especially if you're a fan of the animated series.