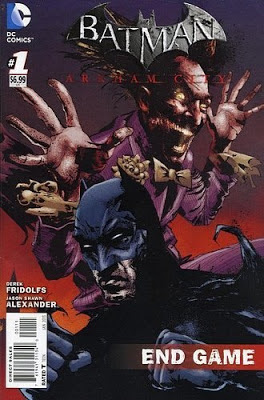 Based on events directly from the 'Arkham City' video game.

The final, climactic battle between Batman and The Joker leads to tragic ramifications in this epic length one shot issue!

I got this one shot issue as a Christmas gift last year and I'll be honest, I was so busy with the other reviews on this site that I had never gotten around to reading it.  I have now and I'm very glad I did.

What I found was a dark, moody and very psychological story dealing with death, loss and a dread underlying feeling of dread all through the issue.

The story itself is absolutely brilliantly written by Derek Fridolfs.  I wasn't all that familiar with his work before but after reading this I'll definitely be looking for some more of his work.  Here he has created such a dark, bleak story that it really gets under your skin yet at the same time, you can't wait to turn the page to see what is going to happen next.

It's primarily the story of Batman and The Joker but at the same time, it's not what you will expect it to be.  In fact, it's far removed from that.  What you see here is both an exciting 'race against time' style story running alongside a backstory telling just how Batman and The Joker got to this point in their rivalry.

The artwork here is some of the darkest and best that I have seen in a Batman story.  They really ramp up the dread and the fear throughout the story while at the same time staying true to the computer same itself.  The best drawn of all of these is how they have drawn The Joker.  At the same time The Joker we know and love and yet drawn in a realistic and, let's be honest, more menacing manner than I have seen in a long time.  Jason Shawn Alexander is another artist that I haven't seen a lot of but I will be on the look out for more of his work, just like I'm going to be doing with the writer Derek Fridolfs.

All in all, this is an absolutely brilliant one shot issue.  They manage to juggle three things perfectly here.  One part game tie in, one part stand alone story and at the same time, still fits in to the Batman world superbly, this is an essential purchase for all Batman fans.

Posted by Pat Scattergood at 00:48