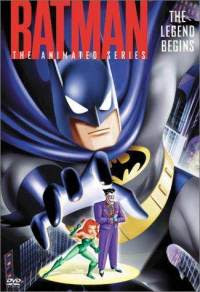 He rules the night as Gotham City's shadowy protector - a crusading Dark Knight defending the innocent and striking fear into the hearts of evildoers. The legend of Batman begins in this thrilling collection of the first five landmark episodes of the Emmy award-winning 'Batman: The Animated Series'.

From the perilous punchlines of The Joker's latest pranks to the nightmarish Scarecrow and Poison Ivy's deadly embrace, this is Batman at his action-packed best!

Episodes comprise: On Leather Wings, Christmas With The Joker, Nothing To Fear, The Last Laugh, Pretty Poison.

The 1990's Batman cartoon developed by Bruce Timm was a favourite of mine as a kid and, for me at least, holds up incredibly well today as an adult.

The art deco feel combined with a dark, 1930's Hollywood style really add a layer to the characters and the setting of Gotham City itself.

Taking some stylistic ideas from the two 'Batman' movies made by Tim Burton, the animated series really stands on it's own two feet.  The portrayal of the characters themselves is absolutely superb, which combined with the near perfect voice casting really brings this leaps and bounds above the other and more recent Batman series.

The cast, like I said earlier, is truly brilliant.  The addition of Mark Hamill as the voice of The Joker is and always will be a sublime piece of casting.  He just completely nails the character to such a degree that whenever I read Batman stories, I always here his voice as The Joker.  For me, as a fan, his is definitely the best portrayal of the character by far.

However, it's Kevin Conroy as Batman / Bruce Wayne that ultimately rules this series.  His portrayal of Batman and Bruce Wayne as completely separate entities is fantastic.  The idea of using two completely differents voices, while not a new idea now, was a brilliant one.  In a bit of trivia for you Batman fans out there, the idea behind doing it as two voices was Kevin Conroy's idea while recording the vocal tracks.

The animation holds up brilliantly well, which considering it's over 20 years old now is a true testament to the sheer effort and skill that went in to making this series.  The way they use the cityscape and shadows as if they were characters themselves is truly amazing.

I also loved the way they drew the characters.  They just absolutely fly off of the screen at you and really involve you in the stories.  When combined with the intelligent writing that stays very faithful to the comics themselves, that adds up to a very, very good series.

It's a real shame that the only special feature is a quick time lapse video of Batman being drawn but when the episodes are this good then that is just window dressing really.

Posted by Pat Scattergood at 05:33