An Interview With George Mann, Creator of 'Newbury and Hobbs' and editor of 'Encounters of Sherlock Holmes' 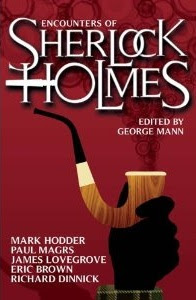 We're joined here today by George Mann, creator of the detective duo Newbury and Hobbs and editor of the new Sherlock Holmes anthology 'Encounters of Sherlock Holmes' to talk to Patrick Challis about the anthology and about his inspirations.

PC: 'Encounters of Sherlock Holmes' marks the appearance of a new set of short stories written by many authors, yourself included.  What inspired you to undertake creating a story for such an iconic and beloved character such as Sherlock Holmes?

GM: I realise now that it's something I've always wanted to do. Holmes has been a part of my psyche since I first read the canon over 20 years ago, and for as long as that I've been creating new adventures for him in my head, absorbing every new story I could find, and allowing him to influence my other work and characters. The time just seemed right to grab the bull by the horns.

PC: You also acted as the editor of the collection.  Did you find this daunting at all or did you go in to with a specific feel that you wanted the stories to have?

GM: Not daunting, no. Exciting! It was a privilege to be given the opportunity to work with so many great writers as they worked with such an iconic character, and to be the first person to read these wonderful new tales of Holmes. I wanted the anthology to have an eclectic feel to represent the flexibility of Holmes and the format that Doyle established for the stories, so the only guideline I gave the authors was that I wanted the traditional Victorian setup - Holmes, Watson and Baker Street - to form the starting point for their story. Beyond that I encouraged people to explore the possibilities.

PC: How did editing differ from writing your own novels?


GM: It's a completely different discipline. As a writer it's on you to create the best story you can. As an editor your job is to help the author to achieve the best possible results. It's not about interfering or changing anything, but asking questions, guiding and offering appropriate advice. And besides, all of the authors writing for this anthology are professional writers who didn't need much editorial guidance at all. But the key is remembering that although it's your anthology, it's not your story.

PC: You're best known for writing the 'Newbury and Hobbes' detective novels set in a period not unlike that of Holmes himself but with a steampunk edge.  Did you find writing your own characters more or less challenging than writing Sherlock Holmes?

GM: For me, working with my own characters is always easier, because readers have no preconceptions about what to expect. With Holmes, there's a feeling that you have to get him right, that you have to do justice to him on the page. Holmes already exists in the minds of the reader, and you need to let them know you understand the character and what motivates him. With my own characters, I can shape them as I see fit. That said, writing the fifth book in the Newbury & Hobbes series, I do feel a certain responsibility to readers to be consistent, and to do my own creations justice, too. Perhaps it's as much to do with teh weight of what's gone before. With Holmes there's a weight of history, and you want to respect that.

PC: There have been many Holmes anthologies throughout the years. Some good, some bad.  What do you feel sets this one apart from the crowd?

GM: Variety, I think. There's everything in here, from traditional Holmes tales, to fantastical adventures, via a few hilarious episodes in between!

PC: What can you tell us about your addition to the anthology without giving away any of the juicy bits?


GM: It's called 'The Case of the Night Crawler' and describes the first proper encounter between Holmes & Watson and Newbury & Hobbes. Watson takes centre stage, but Holmes works constantly in the background, as they join forces with Newbury and Veronica to investigate sightings of a bizarre creature that's been seen hauling itself out of the Thames by Cheyne Walk. Everything, of course, is not as it seems...

PC: If you had to describe the Sherlock Holmes character to a new fan, how would you describe him?

GM: Holmes is an arch-rationalist, an eccentric genius and a master detective. He struggles with interpersonal skills and retains only those bits of information that may be relevant to his ongoing studies and investigations. He'd be a fascinating dinner guest, and I can think of no one else I'd rather go to in a crisis!

PC: What's next for George Mann?

GM: Well, the Newbury & Hobbes series is back with a vengeance this year, with a new novel, The Executioner's Heart, and a short story collection, The Casebook of Newbury & Hobbes. Newbury & Veronica are set to cross over into some different media this year too, with an original audio adventure. I'm just putting the finishing touches to a new Holmes novel, too, which has been a joy to write. So, busy times ahead!

PC: Thank you so much for taking the time to answer these questions for our site.  It's very much appreciated.

GM: Thanks for asking!
'Encounters of Sherlock Holmes' is published by Titan Books and available to buy from the 22nd February 2013

Posted by Pat Scattergood at 06:06