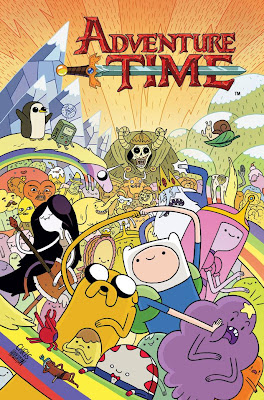 It's ADVENTURE TIME! Join Finn the Human, Jake the Dog, and Princess Bubblegum for all-new adventures through The Land of Ooo.

The totally algebraic adventures of Finn and Jake have come to the comic book page! The Lich, a super-lame, SUPER-SCARY skeleton dude, has returned to the the Land of Ooo, and he’s bent on total destruction! Luckily, Finn and Jake are on the case...but can they succeed against their most destructive foe yet?

I've always been a fan of 'Adventure Time' on Cartoon Network because of it's sheer randomness and humor that not only appeals to me but to my little son as well but I wasn't sure just how that would translate to the page.

I need not have been worried in all honesty because this first volume of Finn and Jake's adventures completely capture the feel and wit of the television show.

All the favorite characters are here and accounted for.  Marceline, Princess Bubblegum, Ice King and many more.  My favorite however was the fact that the writer, Ryan North, brilliantly captured the friendship between Finn and Jake and managed to make it exactly the same as on the cartoon itself.

That's not the only good part here.  The artwork is spot on.  The characters look fantastic, the art is bright and looks like an episode of the series.  That's down to the superb work by Shelli Paroline, Mike Holmes and Braden Lamb.  Their art just really brings the characters to life on the page.

Boom Studios, the people that have brought us this release, have had a long track record of releasing good quality adaptations.  This is by far one of their best.  They've captured the feel of the television series perfectly and  really made a graphic novel that fans can really get behind.

Another great addition to this release was the gallery of all the alternate covers and at the end of the book was a short bit about how they brought the script to the page.  Definitely a great little touch for a nerd like myself.

Not only one for the fans but a fantastic and funny yet incredibly random release for anyone that wants to read a graphic novel release that is funny but one that you can also share with the little ones as well.  That said, if you are a fan of the show, you are most definitely going to go nuts over this one!