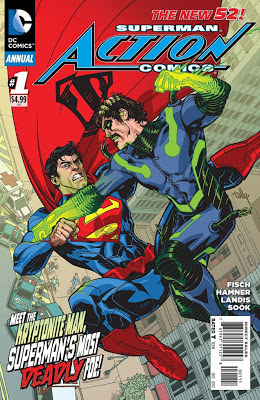 The secrets of the “missing five years” between when Clark Kent came to Metropolis and the present day continue to be revealed!

In the wake of Brainiac’s attack on Metropolis, Superman faces his first Earth-born villain: the Kryptonite Man!

Plus: A special backup story by the screenwriter of Chronicle, Max Landis!

Well, while not brilliant it's definitely one of the better ones.  Released under the revamped 'The New 52' banner, Action Comics have had a bit of a resurgence lately and this title just continues the momentum.

The story itself fits nicely in to the world of Metropolis that is still reeling from Brainiac's attack yet even if you haven't read that story you won't feel lost here.  In fact, it also works very well as a stand alone story.

The writing itself is fast paced and exciting.  Even in introducing a new character in the shape of the Kryptonite Man, they have made a character that I am quite eager to see where they are going to take his storyline.  While the idea that he wants revenge against Superman isn't the most original in the comic book world, it's written in a way that makes me want to read more.

The art is well drawn and really comes alive in the action scenes.  They fit in brilliantly with the fast pacing of the story itself and really help to put forward the new character as a real threat to Superman's life.  I would have liked to see more of the battle and for it to have a bit more of a 'big fight' atmosphere to it but that's a minor complaint.  There's only so much that you can fit in to 48 pages.

All in all, while the 'Batman' stories that have been coming out lately really do outshine the Superman stories quality wise, it really does seem like Superman is finally getting some of his momentum back.  Hopefully this is a good sign for the future of one of the most famous super heroes in the world, especially with the new movie coming out.

Worth picking up for the Superman fans out there.

Posted by Pat Scattergood at 02:41