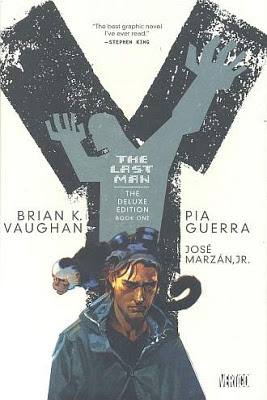 His mother is the President, his only friend a monkey called Ampersand and his survival in this hostile new world is constantly in question!

It's now a very different world, and amateur escape artist Yorick is far from one of the privileged. With society plunged into chaos, and his girlfriend Beth trapped on the far side of the world, he finds himself on the run from a coven of Amazons who want him dead...one of whom is his own sister!

When I read the storyline for this release, I thought that it would just be another one of those cliched style 'last man on Earth' stories that pop up every now and then.

I was completely wrong.

This a completely different style of story. Yes it's a 'last man on Earth' story but it's also so much more than that. It's very intelligently written and doesn't once fall in to the trap of cliche. The characters, even the villains and the bit part players, are fully fleshed out and have many layers to them. Yorick is great as the hero because he isn't an indestructible super hero that succeeds at every turn. Instead he is flawed, annoying in places and even prone to completely messing things up on a regular moments.

Another thing I liked was the fact that while there were many twists and turns, it didn't seem like they were being done for the sake of having a twist in the story. They all had a reason behind them.

The relationships between the main protagonists and also the people chasing them, had fully fleshed out reasons for their actions too. I'd like that to happen more often in graphic novels as it sometimes feels like things are happening just for the hell of it.

The subtle, quiet moments in the story managed to still pop off the page and make the reader want to read on. Not a lot of writers can do that but here, it was done with such a masterful hand.

The artwork is superb. The action scenes really pop and crackle with excitement and the use of shadows and light are sublime. Sometimes in a panel, at first glance hardly anything is happening yet if you take more time to just look and take in the beautiful artwork, then you notice just how detailed the work is.

Posted by Pat Scattergood at 12:33