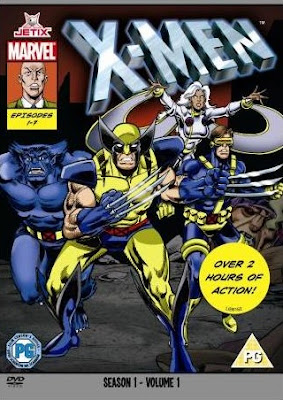 
Born into a world that hates and fears them the X-Men are mutants, genetically gifted human beings with superpowers - The next link in human evolution and the world's newest and most persecuted minority.

The X-Men are an elite team comprised of Cyclops, Jean Grey, Beast, Rogue, Gambit, Jubilee, Storm and Wolverine - Sworn to fight for mutant rights against hostile Government agencies, whilst at the same time protecting mankind from mutant supremacist Magneto who seeks to destroy the human race in return for the atrocities committed against mutant kind.

Released for the first time in chronological order, this release is the starting point to building the first ever complete X-Men series on DVD.

This DVD contains the first seven episodes from Season One of the unstoppable X-Men, making it an essential purchase for any cartoon or comic book fan.

Review
The animated X-Men cartoon from the 90's was always a favorite of mine growing up so when it was released on DVD, I couldn't wait to see if it lived up to my nostalgic memories.

The simple answer is yes, it does.

The only things that I didn't like when I watched this again for the first time were some of the voices just seemed a little off with the characters but that's a minor flaw really.

The first seven episodes are included here and they serve as a very good introduction to the series. All the well known X-Men are present and accounted for, including my two favorites Gambit and Rogue.

The series starts with a major shocker. In the first episodes, a two part story with consequences that are no doubt going to be felt for the rest of the series, one of the X-Men is shockingly killed in action. That really sets the darker tone for this cartoon.

In many ways, the darker and more adult like themes of the stories kind of reminded me of the old Batman cartoons from the 1990's as well. Not in style, they are both different in many ways in that aspect, just the stories.

Also included is the back story of some of the main characters, especially Magneto. His origin is slightly different to the ones I remember but that happens a lot with comic books. Each character has many different origins and it's really up to the fan as to which one he or she likes best.

We also have the first appearances of Magneto, The Sentinels, Sabretooth and a conspiracy by the human military to wipe out the mutant races.

Best of all however, we not only have a glimpse in to how Sabretooth and Wolverine's past we also have the first major fight between the two and it's a knock down, drag out battle. Hopefully there will be a lot more of those to come.

We also get to see in to the love triangle between Wolverine, Jean Grey and Cyclops but only a little bit to wet the appetite so to speak. I do like how they are taking certain moments and stories from the comic books themselves and incorporating them in to the cartoon.

Sadly the special features only amount to a short comparison between the restored and unrestored versions of a double of scenes. While interesting, I felt they could have done more.