Wolverine: The Best There Is - Broken Quarantine Graphic Novel Review 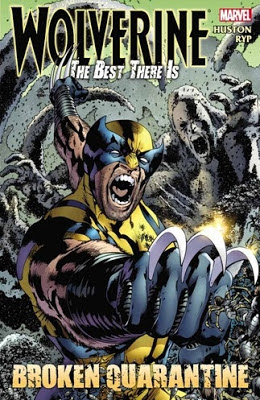 
Wolverine's healing factor has gotten him through a lot. But now his desiccated body is locked away in a quarantine capsule on Utopia, on the verge of death.

Wolverine has become a breeding ground for an alien virus that is slowly turning him into a walking hive of interstellar parasites. Space bounty hunters Monark Starstalker and Paradox have one chance to save Logan, but the cure might be even more horrifying than the disease.

Collecting: Wolverine: The Best There Is 7-12

After the 'Not Dead Yet' story by Warren Ellis that I read, I was expecting something absolutely amazing from this one.

I know that they're completely separate but that story reignited my love for the character so I went in to this one with quite a lot of expectations.  I thought a more well rounded Wolverine and many new characters to expand on that there would be a lot for me to like here.

This one however came across as a bit of a disappointment to me. The story itself seems really interesting on paper but the execution is quite flawed and seems really uneven.

The characters here just don't seem right yet I couldn't put my finger on why.  Some of the scenes and dialogue just came across as lazy writing.  I really thought that the story synopsis for this seemed interesting, exciting and quite unique yet that's not what we have ended up here.

It's the same with the artwork as well. While I've always thought that Ryp's work has been functional but not sensational, here it's really hit and miss. Some of the pages are brilliantly rendered, others are awful.  There seemed to be no rhyme or reason to why the art comes across like this or why he went for certain art choices but it really hurts the release.  It's honestly some of the blandest art I seen in a Marvel release for a very long time.  It's not awful artwork, I've seen much worse but it's just incredibly bland and soul less.

While not horrendously bad it's not good either.  It comes across as one of those graphic novels that's just kind of there with not a whole lot of purpose.  If you read it then your worlds not going to end but if you miss it, then in all honesty you're not missing anyone.

Posted by Pat Scattergood at 07:54