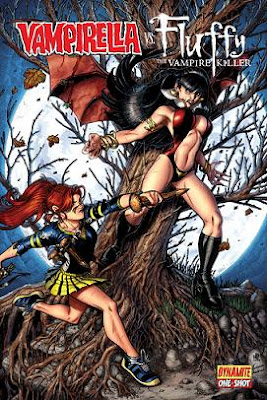 Vampirella is used to fighting the forces of evil but has she met her match in the shape of a young vampire slayer named Fluffy or is there more to the strange goings on than meets the eye?

In this 'Vampirella' one shot, Mark Rahner sets his sights on the Joss Whedon created world of 'Buffy The Vampire Slayer' and America's obsession with abstinence.

While a lot of the jokes work and are highly satirical, the constant 'Buffy' related puns do start to grate near the end. Maybe that was because I was more of an 'Angel' fan than I was of 'Buffy' but I did start to get bored of them near the end.

That said however, the story itself was quite interesting. The idea of a Puritan going around and injuring people so much that they can't have sex is quite a good idea. Without the constant stream of 'Buffy' related puns I probably would have enjoyed it a hell of a lot more.

However, the artwork is absolutely superb. The gore and violence really clashes up against the jokey nature of the story but in a good way. I was also really impressed with the sheer amount of detail in the art and how smooth it was.

All in all, if you are a fan of 'Buffy The Vampire Slayer' and have a sense of humor, you will absolutely love this. If you are a 'Vampirella' fan then you will love this. However, if like me you were never that big a fan of that show, you may find this a bit grating.